I Am Ariel Sharon

A review of I Am Ariel Sharon by Yara El-Ghadban

The child of Palestinian refugees, Montreal author and anthropologist Yara El-Ghadban had an early life shaped by Israeli expansion. Since the nation’s founding in 1948, Israel colonized nearly all Palestinian territory, setting off the refugee crisis that is still ongoing. The architect of these military invasions was Ariel Sharon, the first head of the Israeli military, and the subject of El-Ghadban’s third novel, which won the 2019 Prix de la diversité Métropolis Bleu.

El-Ghadban’s fictional take on the life of Sharon (Arik to his friends) is anything but a typical historical novel. Instead, she presents the military commander and politician almost as a tragic Shakespearean monarch. After leaving the collective farm he grew up on, Sharon’s destiny was tied to affairs of state. First commanding wars against Israel’s neighbours, then backroom politicking with international leaders at his goat ranch, he was eventually elected prime minister. In El-Ghadban’s view, Sharon is more Macbeth than Hamlet, a man of constant action who, only at the end of his life, was beginning to understand the human cost of his military and political ambitions. 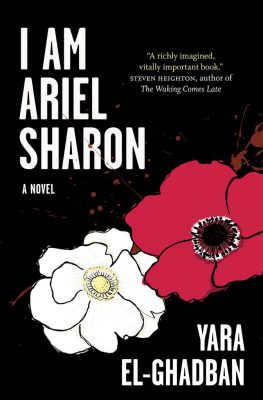 I Am Ariel Sharon
Yara El-Ghadban
Translated by Wayne Grady

El-Ghadban takes the measure of Sharon’s life and uses it as the jumping-off point for a wildly imaginative novel, presenting a singular vision of twentieth-century Middle Eastern history. Starting with the aftermath of Sharon’s 2005 stroke, and the long coma that followed, the action centres around his hospital bed, where friends and family circulate, worrying about his condition.

We return to the bedside scene over the course of the book, but most of what follows is a series of dramatic monologues, giving voice to the women of Sharon’s life. Sharon’s mother Vera begins with a fiery account of her Imperial Russian girlhood, followed by her exile after the 1917 revolution, when she followed her Zionist husband to a Jewish agricultural community in the Palestinian desert. At odds with her neighbours, Vera finds that her long years in the desert leave her disillusioned with the violence of Israeli colonialism and ethnic cleansing. Taking a long look back at the Zionist project, Vera asks, “What happened to us, my son? When did we become such effective warmongers?”

A softer voice is provided by Lily, Sharon’s second wife. She lovingly depicts her husband as a political conniver connected to dignitaries. She also sees him as a dedicated family man, mourning the violent death of his first son. Lily has few illusions about Israel’s political class and Sharon’s relationship to his constituents: “let’s call them by their name, my love: colonizers. […] Where would they be without you, tell me?”

These virtuosic soliloquies delivered to the incapacitated Sharon are riveting. Each woman has a unique voice and way of looking at the world. None more so than the final speaker, a desert spirit named Rita, who carries the dying Sharon on a phantasmagorical journey through the longer history of the land. She reveals to him the extent of Palestinian suffering in the face of unfettered Israeli expansion.

El-Ghadban does not shy away from presenting the flaws of the man known as “the Butcher of Beirut.” But what ultimately emerges from the pages of her novel is a humane portrayal of a larger-than-life figure, caught in the wheels of history. I Am Ariel Sharon is a taut, unflinching novel that skilfully surveys the last eighty years of Israeli history, through the voices of the women surrounding one of its central figures.mRb