Whether or not you agree with its blunt sentiment, you’ve got to admit that as an attention-getting device it takes some beating. For a Canadian writer to name a novel I Hate Hockey – or more specifically, and even better, for a Quebec writer to name a novel J’haïs le hockey, as François Barcelo has done – is an act of national nose-thumbing akin to, say, an Argentinian novelist penning something called “Tango Sucks.” When, on the very first page, Barcelo’s narrator/antihero Antoine Vachon goes one better than the book’s title and calls our national game “the most resounding expression of our national stupidity,” the gloves have well and truly been dropped.

There is, and has been, no shortage of pro-hockey literature: Ken Dryden, Roy MacGregor, Stephen Brunt, Paul Quarrington, and Adam Gopnik have hymned the game’s essence in their own ways, all without downplaying the brutality that has always been part of the sport’s unique mix. Still, maybe the time is ripe for some wholly dissenting voices. Only an immature culture is afraid of self-criticism, after all, and to be a hockey fan is a complicated calling at a time when the mere voicing of the words “Sidney Crosby” is enough to induce a crisis of conscience. The current epidemic of concussions and other injuries can make you feel, on a bad day, as if you’re complicit in the systematic crippling of a generation of Canadian youth. Thankfully there does appear to be the stirring of a literature willing to take on the new mood. Last year Lynn Coady explored the inner life of a hockey goon in her novel The Antagonist, and now comes Barcelo. 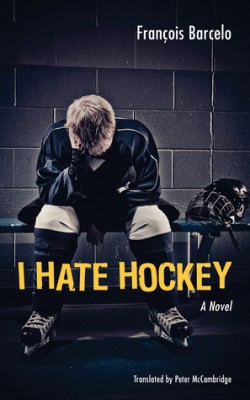 While it’s apparent from the start that Vachon’s hockey antipathy may have at least as much to do with his own issues as with the game itself – here is a man who has comprehensively screwed up his life and is casting about for the nearest scapegoat – he does make some good points. As someone just old enough to have experienced a time when fans were trusted to know when to cheer and when not to, I find that his account of attending a game at the Bell Centre with his then six-year-old son rings all too true: “music with no apparent connection to the game blared from the loudspeakers … we were pelted from all angles by deafening ads projected at the dazed crowd from every screen and amplifier in the building.” Montrealers used to pride themselves on their disdain for such things, but now we go along with it all as meekly as fans in Columbus or Tampa. Barcelo/Vachon also touches upon most of the more troubling social issues surrounding the game at the youth level, from the class implications of simple participation – the unemployed Vachon is forced to stand by as his estranged wife “pays a fortune” to equip their teenage son’s minor hockey participation – to the recurring problem of adult authority figures preying sexually on their vulnerable young charges.

All fine and good as far as it goes, but the trouble is, Barcelo never goes far enough. No sooner is a specter like sexual molestation introduced than it gets lost in the narrator’s web of avoidance and denial. It would help if Vachon were either slightly sympathetic or carried to the extreme of a parodic grotesquerie, but unfortunately he satisfies on neither of those levels. Self- pitying and casually racist – he describes a half-Asian teen as “not super slanty eyed” and mocks small-town Quebecers for being unable to tell a Chinese from a Vietnamese even when it’s evident he can’t make the distinction himself – Vachon is anti-PC to an extent that makes at times for downright queasy reading. This is a man honest, or foolish, enough to admit briefly entertaining the notion of receiving sexual favours from a minor. We might be more inclined to go with Vachon’s voice if the roots of his misanthropy were better explored, but the best we get is a glancing remembrance of his boyhood failure at hockey and how it affected his relationship with his father: “Things were never the same between us after that. He never forgave me for forcing him to give up on his dream of having a famous hockey player for a son.” An archetypal Canadian scenario, to be sure, but if every hockey son who disappointed his father turned out like Vachon, we’d be a sorry nation indeed.

In the end, then, a great title gets squandered. I Hate Hockey may reveal something about a certain kind of male anger, but it tells us disappointingly little about … well, about hockey. The anticipated iconoclastic manifesto never materializes and we’re left with an uneasy mix of mid-life crisis novel and social issues novel, a book that’s too raw for the young adult market and not quite meaty (nor long) enough to succeed as regular fiction. I had hoped for a literary equivalent of Guy Lafleur. I got Scott Gomez. mRb