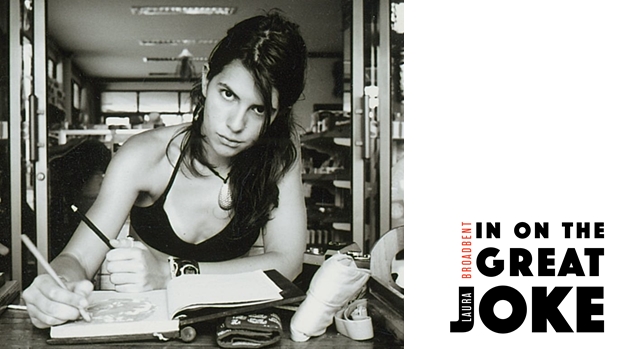 Laura Broadbent – The Alchemy of Language

In on the Great Joke

Underpinning the collection is the problematic first line of the Tao Te Ching, which poses a number of paradoxes. Firstly, Lao Tzu tells us right off the bat that the Tao (or “Way,” referring to the mysterious, essential process and structure of the universe) cannot be named. Language, as Broadbent remarks, “is a limited system.” If there is already an inherent disjunction between the word and the thing, or naming the unnameable Way, then there is a challenge when it comes to the tricky business of translation. As Broadbent notes, there are over 170 English translations of the Tao Te Ching, each of which translates the first line differently, and often with a note about how the Way cannot be talked about. Nevertheless, the Tao Te Ching (a text that has been translated more frequently than any work save the Bible) continues to be discussed. Thus, “the Great Joke” about language and human endeavour (and inevitable failure) emerges. Broadbent, aware that she, too, has been caught in this conundrum, participates in this ongoing Joke.

The first half of the book, “Wei Wu Wei / Do Not Do / Tao Not Tao,” is a poetic engagement with Lao Tzu. The latter half, “Interviews,” celebrates the collaborative task of reading and includes imagined interviews with Jean Rhys, Clarice Lispector, and W. G. Sebald. Treatments for five short films are interspersed throughout the book. The joke defined in Broadbent’s introduction touches on an overarching question of identity and definition. How – in a “limited system” – does literature push limits? Where are the borders between genres? How absolute are the categories? When asked, Broadbent replies, “Fuck ‘lines’ or borders! Everything flows.” Indeed, Broadbent lays bare the lines that encompass “Poetry” as she departs from traditional verse to dabble in essay, interview, and cinema. “‘This is That’ / is a phrase I attempt / to understand,” Broadbent reiterates. 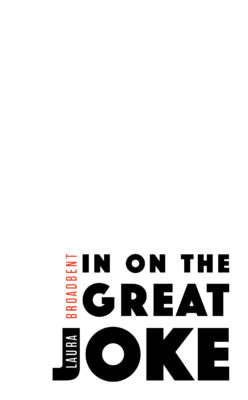 In on the Great Joke
Laura Broadbent

While the book is described on its cover as “a palace of hybridity,” Broadbent admits, “in my head it more resembles a Bosch painting, a cacophony, a tower of Babel except in one language.” Her poem, “Getting in the Way of the Way,” aptly illustrates this cacophony as excerpts from the Tao Te Ching are splintered with dialogue, anecdotes, and observations. But the title also offers an alternative reading of “getting in the Way” – not so much Broadbent impeding the flow of Lao Tzu, but accessing the Way. Her careful juxtapositions generate and offer a concrete base for the otherwise difficult and cryptic Tao. For example, between excerpts in which Lao Tzu makes reference to the infant and primal mother (principal symbols for the Tao), Broadbent inserts her own image:

A mother with a bountiful ass
chases her toddler who runs,
maniacally, toward the busy street,
his arms raised in suicidal delight,
the mother’s ass moving in all directions at once
as she runs and grabs the lifted arm so violently
he hovers and dangles at an odd angle
and for a moment we can see
how the mother wants to kill the child
she just rescued from being killed.
How does the heart even.

The final line touches on not only the immensity and complexity of maternal love, but also love in general. (Broadbent echoes an earlier sentiment in the poem in which someone explains that “the heart is able to hold so much / because of its holes.”) The paradox of the heart and its capabilities work together with Lao Tzu’s excerpts, sharing recognizable borders of mystery and ineffability. But Broadbent is not naïve in believing that she has so easily clarified or “accessed” the Tao. She modestly undercuts her efforts, such as when she writes:

Let’s just take a moment
to honour the Great Joke.
Is this an allegory?
Absolutely nothing makes sense.

“Language binds – it can at once be a tool for bonding or one of imprisonment. Language is a magic I think we are all aware of enough to use carefully because of its power.”

Perhaps the sharpest execution of “the Great Joke” is the anachronistic letter, “Lao Tzu Applies for a University Teaching Position,” in which Broadbent cleverly yokes the ancient philosopher with the rigid and formulaic structure of the institutional letter of application. (The real joke may be that scholars formulate exactly such a letter when applying for university positions.) Broadbent’s imagined Lao Tzu describes his syllabus and pedagogy – typical of the “genre” – and the result is hilariously enigmatic:

Lao Tzu’s description of the sage as being “detached, thus at one with all,” rings true for Broadbent’s view of the poet: “The poet speaks – ideally – from ‘where the pot is not.’ Emphasis on ‘ideally.’ Speaking from where the pot is not is obviously intensely more elusively difficult than it sounds. A difficult effortlessness. Oxymorons get close to describing this.”

In on the Great Joke plays along with the contradictory position of the poet. While the first chapter, “Wei Wu Wei / Do Not Do / Tao Not Tao,” highlights a negation, a “not” that cancels something out as a way to emptiness, a zero-sum, or a Taoistic “detachment,” the second chapter emphasizes attachment. The introduction to “Interviews” pays homage to “the alchemy of reading” and includes a number of binding elements and relationships: reader/text/author, interviewer/interviewee, and film/viewer. The pull between the two chapters is, for Broadbent, two sides of the same coin: “Language binds – it can at once be a tool for bonding or one of imprisonment. Language is a magic I think we are all aware of enough to use carefully because of its power.” The transformative magic of language is described by Broadbent as having the “effect of a fragrance.” Reminiscent of Anne Carson, who also describes reading in synaesthetic terms (“a fragrance of understanding you come away with”), Broadbent distills and blends with the “fragrances” of other writers in a series of inventive and beautifully elliptical interviews.

When asked to describe her own scent, Broadbent replies, “My fragrance of writing probably stinks if speaking literally. It stinks like toil.” This stirring and captivating collection is no doubt marked by her erudite and intimate engagement with other texts and writers, but the scholastic and creative “toil” is also boisterously amusing and witty. Broadbent adds, “in that stink is also a lot of play – donkeys saunter by, things fall from the sky … what would ‘play’ smell like? I suppose it would maybe smell like a fresh breeze carrying the scent of berries and citrus maybe.”

In on the Great Joke may be read alongside notions of imperfection, paradox, and joy – “the perfect soundtrack / to the mockery of all things” – where nothing is off limits: scholars, dogma, love, death, even the poet herself:

Gillian Sze is the author of nine collections of poetry. She has a PhD in Études anglaises from Université de Montréal and teaches creative writing and literature in Montreal. gilliansze.com