In the End They Told Them All to Get Lost

Many of us, in moments of hardship or trauma, have likely been overwhelmed by a desire to give up and start over. To abandon the life we have, with all its complex and terrifying problems, and throw ourselves into completely new surroundings. Happiness, we tell ourselves, might be attainable somewhere else.

In Laurence Leduc-Primeau’s first novel, In the End They Told Them All to Get Lost, we follow Chloé, a young Quebecker who has just moved to an unnamed South American country, running away from something that is never fully defined. She doesn’t know anyone and can barely speak the language. In a series of vignettes, we follow Chloé as she struggles to acclimate, improve her halting Spanish, and overcome her self-imposed isolation. Much more than a simple travel narrative, Leduc-Primeau’s work is an exploration of depression and the ways in which we attempt to make meaningful connections with those around us.

Chloé is a mysterious narrator with no backstory to speak of, and her reasons for uprooting herself are vague at best. “Everyone’s crazy here. That’s why I came.” Her internal monologue is all that we have, and from the very first line, it draws us in: “I’ve been staring at you for a week, Betty. Betty the stain. Dirty and alone.” 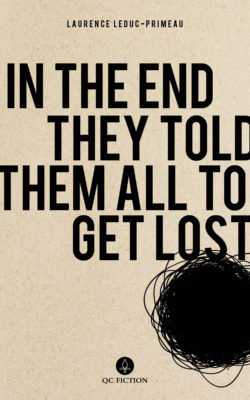 For Chloé, depression is a grey and unshakeable weight. It holds her in place, smothers any jolt of feeling. But as the days pass, she does her best to build herself a life. She makes “pasta à la nothing” and practises her “cereal box accent”; joins a dance class and goes to war with her roommates’ canine “beast.” She simultaneously seeks out and avoids the company of others, of men who ultimately fail to fill the void inside her. “I keep hoping that someone might save me from myself,” she says. In the novel’s darkest moments, Chloé ruminates on a past she’s trying desperately to block out: “I’ve erased almost everything. From that week, that month, that life.”

Language is a pivotal part of Chloé’s story. In all of her interactions, we feel and relate to her deep and aching desire to understand and be understood. For the whole of the novel, she’s an outsider looking in. In the original French, Spanish and even the occasional English word are threaded into the text; they blend seamlessly with one another, without italics or other typographical changes to set them apart. Similarly, the author never uses quotations marks or line breaks to signal dialogue. With these conventions stripped away, we are left with a text that feels all the more intimate and exposed.

Natalia Hero, an emerging literary translator and author, brings Leduc-Primeau’s work to life for an English audience. Hero seems to slip easily into Chloé’s shoes and does a great job of recreating her voice. While the spattering of English is assimilated in translation, Hero keeps the Spanish, and even some French, intact: “Still life. I like that better than the French, nature morte. Dead nature, that scares me.” She also keeps the text bare by omitting quotation marks and shifts in typography. The language is well paced and has the same stream-of-consciousness energy as the French. Hero’s writing is straightforward and informal, but not without poetry.

While I devoured In The End and loved Chloé’s sometimes self-deprecating, sometimes vulnerable voice, the final few pages left me unsatisfied. In the same vein as Salinger’s The Catcher in the Rye (a book Chloé herself reads), Leduc-Primeau’s slice-of-life novel gives us very little character arc or evolution. And while some may argue that this lack of change reflects reality, my optimistic side wanted more. In some small way, I wanted Chloé to confront the events that led her there. In the novel’s final pages, an envelope arrives for Chloé in the mail, sent from someone in her not-so-distant past. I wanted her to open it. To close her bedroom door, take a breath, and show us what was inside. mRb