A review of In Translation by Ed. by Sherry Simon

In her introduction to this new book of essays on Canadian literary translator Sheila Fischman, editor Sherry Simon equates translation to cultural tourism. Writing about Alastair Reid’s translations of Borges and Neruda, Simon claims that, as the two poets “had been his guides to Latin America, he was their companion in the English-speaking world.” This equation gives rise immediately to a host of fallacies – whether there is such an entity as the English-speaking world, for instance, whether Latin America is knowable through poetry, whether Borges’ guides in the English-speaking world mightn’t have been his Anglophile (and Anglo-descended) parents, or Twain, or Old English epics, or Oscar Wilde… 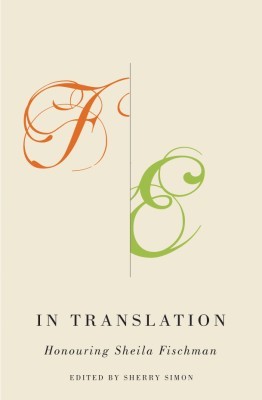 In the case of Sheila Fischman, however, the national alignment is somewhat more apt. In his contribution to In Translation: Honouring Sheila Fischman, former House of Anansi Press editor-in-chief James Polk confirms Fischman as a guide to the other literary solitude: “Sheila has produced by now a unique Quebec literary saga for us anglophones. … She recreates the French version, yes, but also transforms it into our version.” For English-Canadian readers in the late twentieth and early twenty-first centuries, Fischman has been the introduction to French-language Quebec literature.

I’m not sure the project of national identity is quite so binary anymore. Nous and vous are especially fraught at the moment, as much as in the seventies, but such divisions seem increasingly disingenuous, revealing political machinations more than they reflect actual experience.

Fischman herself is aware of the shift and speaks to Simon of the growing bilingualism and cultural awareness in publishing (the interviews with Fischman included in In Translation, one of them previously unpublished, provide an insightful counterpoint). While the “children of Trudeau” to whom Fischman refers were shaped by  an array of forces, the evolution of translation in Canada hinged largely on a single figure. Fischman is a master of her craft, with about 150 publications and a slew of prizes to her name, but it should not be forgotten that, as well as establishing cultural signposts in an era when they were few, she was also a force on the political end of the profession.

Roch Carrier, in his essay “Merci, Sheila!” (translated by Donald Winkler), waxes nostalgic, recalling artsy gatherings in the Townships in the late sixties: “The conversations took place in English, in French, in a combination of languages. … It was a time of unmistakeable conviction.” Fischman has been among the more convincing proponents of literary translation, launching careers, fighting for recognition while maintaining a generous artistic transparency, paving the way. Fischman, Carrier asserts, “was, and remains, an extremely powerful literary agent.” All along, she has worked relentlessly. There are no corner offices in literary translation.

A well-deserved Festschrift, the book is also a trove of Canadian publishing history – In Translation invites giving in to nerding out, from CanLit (CanTrans?) gossip to expansive discussions of tiny semantic variances. In Translation offers contextual overviews, abstract musings on the art in general, and ardent testimonials to Fischman’s work in particular, by writers, transla

tors, and lit-and-language types including Graham Fraser, Patricia Godbout, D.G. Jones, and Gaétan Soucy. Some structural or editorial decisions are a bit puzzling, but even the less explicitly pertinent pieces are good reads, and the less-good reads are pertinent.

Sheila Fischman has made it her work to transpose, to use Soucy’s word, as from one musical key to another. In Translation movingly catalogues the overwhelming gratitude and admiration of colleagues and friends, and stands as a testament to the personal and professional magnanimity that has characterized a good, long career. mRb