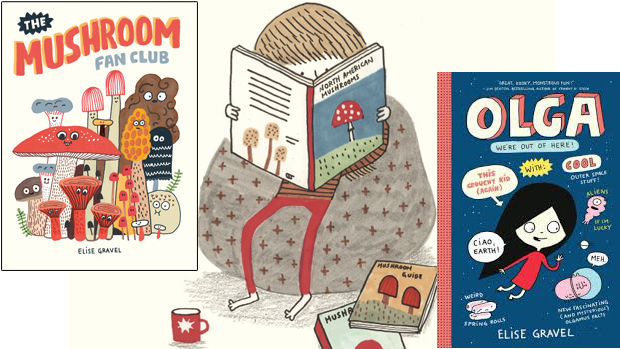 Elise Gravel is inventive, hardworking, and prolific. In fact, she’s published around fifty books so far – she’s not exactly sure how many.

“I lost count,” she says cheerfully.

As a child, Gravel thought she would be either a teacher or a rock ’n’ roll star. Now all grown up, she’s become one of the most successful author-illustrators of kids’ books in Quebec, part of a vibrant scene that includes such stars as Marie-Louise Gay and Mélanie Watt.

Once a kid who loved to draw, Gravel studied graphic design, and although she took a few illustration courses as part of her degree, she never expected to be a professional illustrator. But after graduation, friends advised her that she needed to develop a consistent style, so she practised by creating a series of funny posters for fictional products. When she had about twenty-five of them, it occurred to her that they would make a great picture book for kids, and so they did: Le catalogue des gaspilleurs, the cover of which features a happy cartoon kid clutching a fistful of cash, crowing, “Encore PLUS de bidules inutiles!!!” was Gravel’s first title. 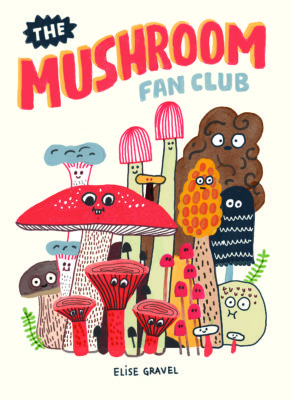 She’s never looked back, creating book after book in her signature whimsical style, with a special emphasis on monsters and yucky creatures of all kinds. Among the “disgusting critters” in her series
of the same name are worms, slugs, rats, and – ugh – head lice. But Gravel is not simply going for the ewwwwww. For one thing, her friendly graphics make even her slugs and lice appealing, with their happy smiles and big eyes. Even more than that, the warmth and compassion that consistently infuse her story- telling are gently contagious.

“As a kid I liked underdogs and creatures nobody liked,” she says. “I felt pity for those bugs […] I found them endearing. I wanted to convey that to kids so they would see the world in a different way.”

“I keep finding the things other people find disgusting, interesting.”

Clearly, although she never made it into a classroom, Gravel has channelled her early desire to teach through her pen and markers. “I keep finding the things other people find disgusting, interesting. In gener- al, I like kids to learn stuff while they don’t think they’re learning stuff. Humour and the gross factor are ways to do that. Simple, fun, and cool ways.”

This spring’s two new books are perfect examples of this approach. In The Mushroom Fan Club, a non-fiction guide for kids, Gravel shares her passion for foraging, and especially mushroom-hunting – “like a treasure hunt that nature organized just for us!” This involves not only romps in the woods, but also careful observation, with mushroom sizes, shapes, colours, and even smells (maple syrup!) detailed for the reader.

“I was with some friends who had never done it and we went walking in the woods,” she says. “The kids went wild […] and I realized the kids loved it, and there’s not much about that for kids.”

The Mushroom Fan Club is not just a field guide; amid the goofy gatherings of smiley-faced boletes and chanterelles, Gravel reminds us that humans are not the only ones who forage for our suppers, urging readers to be gentle with the natural environment, and leave some mushroom munchies “for the slugs and squirrels.” This is consistent with her approach, which is both pedagogical and compassionate. “In general,” she says, “I want everybody to be happier, more tolerant, to help each other.” 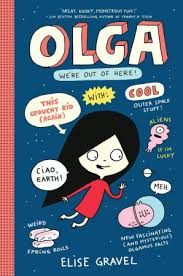 Olga: We’re Out of Here! is a charmingly wacky graphic novel for kids aged eight to twelve. It’s the second volume in the adventures of Olga, who in volume one discovered an “extremely awesome creature” named Meh in her trash can, a new species (which she named Olgamus ridiculus, after herself, naturally). In this sequel, Olga hangs out with her friend Rita, a French-speaking spider, eats plenty of her favourite food (mac and cheese with pickles), makes new friends, and discovers new delicacies (peanut butter-filled olives and spaghetti-and-meatball-flavoured lollipops, for example). She also puts her science skills to good use once more, researching space travel and observing the Olgamus’s behaviour and biology. And in case anyone still thinks girls can’t grow up to be scientists, this book is dedicated to Jane Goodall, a poster of whom hangs over Olga’s desk.

A free, printable poster entitled “Olga Explains the Scientific Method” is available on Gravel’s website. In fact, the website has a whole section of such comics and posters. “I have so many things to tell kids,” Gravel says. Making posters that teachers can use is one way she can communicate ideas that are important to her, “to make people happier and help them live together.” She challenges gender stereotypes, affirms the value of diversity, and promotes science. Her most recent poster is “What’s a Refugee?”

Although all of Gravel’s books are available in French, not every book makes it into English, in part because of the limitations of American book culture. In a recent interview with
Le Devoir, Gravel compared the US market and the Quebec/French markets: “C’est vraiment deux planètes.” When possible, Gravel sells her books in the United States first, garnering a much larger advance from the much larger market. But American publishers have less tolerance for books that do not contain conventional narratives; for example, Le catalogue des gaspilleurs was never picked up there.

US publishers are also more wary of offending sensibilities. Gravel’s book about a band of dirty little kids who live naked and free in the forest with their friends the animals, La Tribu qui pue, has also failed to find an American publisher. Gravel was given to understand that it was due to the children’s nudity, described as “too French.” Some books she cre- ates knowing they will just be for the French-language market in Quebec. She makes less money on those, but they are “more fun,” she says. She credits government support of the book industry in Canada with giving publishers the freedom to be “more open-minded and creative, and take more risks.”

Plenty of her books have appeared in English; in fact, she often writes them in English first, or translates them into English herself. “When I have an idea, I know right away this one is for the United States, or Canada, or Quebec, or France. They’re all different. I’m extremely lucky to be able to make books in both languages.”

Gravel is hard at work on the third book in the Olga series, which will also feature Meh, the Olgamus ridiculus. She’s currently at the illustration stage. Olga the character arrived as a drawing, but when Gravel is working on longer books, like the Olga series, she generally writes the text first.

As for the mac and cheese with pickles, is this something Elise Gravel eats herself? “I never tried it,” she says, “but why wouldn’t it be good? We already know cheese and pickles is good, we put pickles on a cheese- burger, so why not?”

A hypothesis that requires an experiment, perhaps? mRb