Inuit and Whalers on Baffin Island Through German Eyes 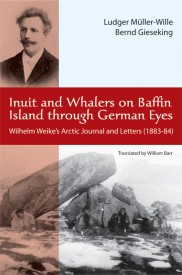 In the late nineteenth century, European and Scandinavian countries had already been exploring the Arctic for centuries, and several had been present semi-permanently and commercially for decades. By the 1880s, Germany had a polar station at Qingua, at the deepest point of Cumberland Sound, and the Germans, along with many of their occidental compatriots, were fascinated by all things Arctic.

And so it was that, in 1883, Franz Boas set out for Baffin Island, taking with him as a manservant a young man who had worked for his parents, Wilhelm Weike. Boas, though trained as a physicist, was interested in natural history and anthropology. This year-long expedition was the beginning of a career that would eventually bring him to teach at Columbia and include significant contributions to Native folklore and linguistic anthropology. Boas’s Arctic journals and letters, first published in English translation in 1994, reveal a thoughtful scientist who was already cognizant of the nuances of historical science – taking observations in their own context. Meanwhile, cheery and pragmatic, Weike’s journals, now also translated into English and buttressed by editorial context, flesh out the quotidian aspects of Boas’s nascent ethnographic concerns.

Wilhelm Weike was hired to cook, haul, sew, clean, hunt, re-sole shoes and so on, and had the skills as well as the physical and psychological constitution required to support Boas during his year on Baffin Island. These journals of an uneducated helpmate are something of a cultural oddity, and ultimately remain a footnote to the expedition.

The journals are superficially domestic; Weike’s diligent daily entries are a catalogue, without afterthought or analysis, of meals prepared and endless coffee brewed, of the commonplace deaths of Inuit children, of the cold (“in the afternoon the temperature rose to -44oc”). Boas had been the one to instruct Weike to keep a journal, intending to use his servant’s writings as a resource, and Weike, in his log, remains deferential to “Herr Dr Franz Boas.” The editors’ inclusion of a handful of letters Weike wrote home, however, offer a glimpse into the poetic soul and dry wit of this man whose socio-economic class and lack of higher education determined his role on the Boas expedition. For example, on the journey west, Weike writes home of the “Greenland icebergs that towered up like church steeples.” Later, after settling into the Scottish whaling station, with its music and drinking and merrymaking, Weike wryly sighs, “I had to play the triangle again.”

The existence of and access to such documents is typically fraught with difficulties, both graphically and contextually. Weike wrote primarily using the German Gothic Spitzschrift, while the copyist hired by Boas rendered a version in Roman script, negotiating Weike’s abysmal handwriting, transliterations from English and Inuktitut, and still-fluctuating cartography.

The editors of Weike’s journals are particularly painstaking in documenting the variants of Inuit names and in tracking the numerous European interpretations of the land and its inhabitants. Some explanations veer into redundancy: do we really not know how marine mammals breathe through holes in the ice? William Barr’s translation of Weike’s no-frills journal is functional, though he occasionally takes temporal and idiomatic liberties (thus, for instance, he has Weike “feed[ing] our faces” in August 1884, while the American slang coinage would not exist for another two decades).

The editorial tone of Inuit and Whalers on Baffin Island through German Eyes is not quite academic nor quite colloquial. The editors’ preface and afterword, notably on the long-term relationship between Weike and Boas, do provide additional insight into the German class structure of the time, and into the character of the man who would become the father of modern anthropology. Yet, much like the indefinite position of Weike’s journals – part utter banality, part detailed archive – Müller-Wille and Gieseking’s book fills in a bit of Arctic exploratory history, but it’s hardly required reading. mRb