It Is an Honest Ghost

A review of It Is an Honest Ghost by John Goldbach

John Goldbach’s third book, It Is an Honest Ghost, in some ways continues the formal and thematic explorations of his earlier work. The stripped-down prose and philosophical semi-speculation that marked his first story collection and his satirical noir novel The Devil and the Detective are present here, too. That noted, It is an Honest Ghost is no rehash; it provides new, and arguably more polished, takes on such concerns.

The book contains six short stories and a novella covering a range of subjects. The opening piece, “An Old Story: In Five Parts,” for example, takes the familiar dissatisfied young manhood narrative and gives it psychological nuance by fracturing it into free-standing vignettes that oblige the reader to tease out the connections and their significance. The strategy is made more pointed by the story’s declarative tone and unresolved ending.

The title story, on the other hand, uses a more conventional narrative approach in following a group of friends under the influence of hallucinogens. Unexpected dark windows in the workplace of one of the men prompts the group to check for possible problems in the building. Once inside, the absurdity of their fears is troubled by unexpected noises, thoughts of a ghost, and the ways in which their conversation veers off into ontological riffing: “‘You’re having metempsychotic fantasies, James,’ said Allan. ‘Traits are passed on, obviously, through genetics and so on, but not actual souls. This idea of a soul is a byproduct of consciousness.’” The yoking together of intoxication, tension, and rationalization grows both funny and disturbing as the story draws to its close in an image of a monstrous, hybrid serpent-goose hissing in smoke. 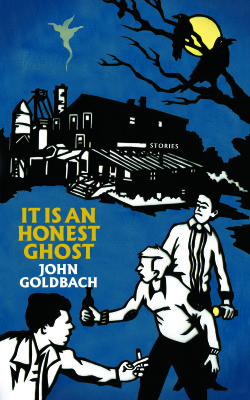 It Is an Honest Ghost
John Goldbach

The book’s centrepiece, however, is the novella “Hic et Ubique,” whose Latin title declares its principal interests. The story follows the narrator, named (in a moment of pomo metafictionality) John, a writer travelling to Kenya to cover a literary festival. While there, he encounters local authors and artists, reconnects with old friends, and has the beginnings of a holiday romance with MC Karen, a Kenyan musician. A vaguely sick feeling haunts John through all this and his discomfort builds to a paranoid break constituting the tale’s climax. “Hic et Ubique” lays out the simultaneous euphoria and nervousness that mark so much travel – as it is mediated through the haze of alcohol, illness and/or medication, and sometimes through flashes of optimism by John’s busy (self-)consciousness – with great effectiveness. This in turn underlines the ways in which, as the title suggests, there is no escaping one’s life because it is always “here and everywhere.” A truth conveyed even in the novella’s details, like when John calls his girlfriend in Montreal: “It was loud where she was, at her aunt’s house – she seemed harried and distant – and so we didn’t talk long, only for a few minutes. I walked off […] I told her I didn’t even really know where I was, and I looked up at the night sky and tried to describe it to her. I felt myself becoming emotional, missing her terribly, trying to tell her that, but then she said she had to go ….”

In the end, it is this notion of the inescapable itself – of being constantly troubled by something that is all us – that knits together what could seem a collection of various unrelated pieces. This is fair enough; giving shape and meaning to elusive human experience is one of literature’s most venerable functions and it is always welcome however ambiguous, however odd, any particular experience – or shape – may be. mRb