A review of Aquariums by J.D. Kurtness

In this wacky world we live in, stories that were once deemed science fiction can now easily resemble an absurdist take on our reality. Such is the case with J.D. Kurtness’ Aquariums, initially published in French before the pandemic and now available in an English translation by Pablo Strauss. It very loosely follows a young marine biologist who finds herself on a research vessel while a virus decimates most of the planet’s population. Is Kurtness some kind of modern-day seer, or are the once horrid things a sci-fi writer could imagine now very likely to happen to us? 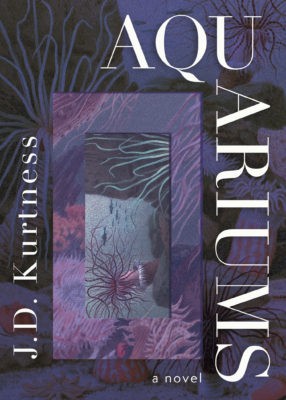 Stories about a pandemic might not be what we want to read right now, as we poke our heads out from the abyss, but this shouldn’t dissuade readers from delving into Aquariums. Kurtness’s story strays from the doom and gloom you might expect to focus on the coming-of-age tale of its protagonist, Émeraude Pic, an observant and independent girl with a passion for science. The author’s sentences at the beginning are short and matter-of-fact, like the fleeting thoughts of a child. “I turned eleven at the end of the summer, and I grew a lot. Gained weight, got a tan.” She is raised by her widowed father, often staying with her aunt’s family, before moving on to boarding school. She grows up and studies what she loves: marine biology. We glance at the plight of the planet through her eyes. “The pessimists believe it’s now too late. The tropical oceans teem with poisonous jellyfish and lionfish scavenging in chalky beds of dead coral.” A pandemic with a side of climate disaster – why not?

In the world of Aquariums, Émeraude doesn’t become the woman she is just because of childhood circumstances or social growing pains. Kurtness travels into the past to peel back the mysteries of her character’s DNA. Between segments about Émeraude’s time at school and her work experiences as a scientist, the author introduces other narrators sprinkled across time and space. We meet a prehistoric man witnessing a giant squid devouring a whale. We follow a young boy obsessed with the sea who leaves home to work as a sailor. The encounters go on: a village witch feared by her peers, a draft dodger seeking refuge in the woods, a famous singer coming out of the Great Depression.

The reveal of a shared surname informs us that these are Émeraude’s ancestors; the people who paved the way for her to be one of the last survivors of the end of the world, researching the death of the oceans on a boat off the coast of Labrador:

“Everyone can see the mess we’ve made, but no one’s doing anything to fix it.
I’m part of the massacre too. I compile, collect, and save an infinitesimal part of the biodiversity, knowing full well that once I’m gone, it will all be destroyed without remorse. I know it’s irrational and pathetic, but I can’t shake the thought that this whale may have died of despair.”

This is a small book on a huge theme, set in various places and eras, featuring different perspectives. It could be confusing, but it works – so much so that I sometimes wished Kurtness had picked up some of her loose threads and developed the stories of Émeraude’s ancestors instead of returning to her protagonist’s journey. I want to know more about the scarred sailor, the blind shark, and the travelling whale. She dips her toe into the fantastical or the romantic and then pulls back, back to the science of a dying world. Aquariums is an inventive book on a grim not-so-distant future. In the end, Kurtness chooses to believe in the resilience of humanity. Like her ancestors before her, Émeraude will fight for her people’s future.mRb