A review of Bitter in the Belly by John Emil Vincent

In Bitter in the Belly, John Emil Vincent writes a delicate cosmology as he reckons with his friend’s suicide. Language fails before the immensity of such loss, though Vincent gestures at the contours of speech and things, giving shape to the silences that befall tragedy. He writes gingerly, in a tone polished and precise, outlining absurd imagery fitting to memories of pleasure and pain. In “Clear Cut,” Vincent searches for the “name” of the “half-otter/half-human” which “calls from the forest/ in the voice of someone you love,/ someone you love in trouble” or “that thing” which will “lure you into the forest./ I mean: metaphorically.” 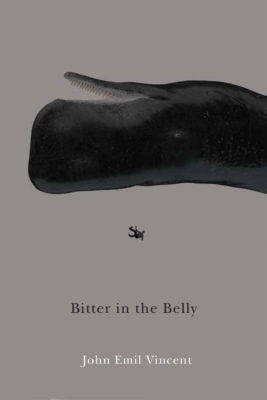 The metaphor of Jonah and the whale looms behind the collection’s reverent tone – but what of mercy and salvation in the belly of such bitterness? Packed with silences and the contours of things unsaid, Vincent grapples with fatality, with a mourning that is also a longing, as in “Aqueduct”:

Or with pain that bites, as in “Reverse Translations”:

Then came a day when returning
became not possible
but irresistible.
If memory bit,
this chewed.

Still, the ineffability of absence remains. Vincent gestures not just at a cosmology, but also at an etymology of self in tragedy – in the fatality that comes of naming. As in “Thick Pronoun,”

We are lastly
our names.

In between,
something slightly less.

In between. The poem ends with an omen –

and the disorder
of your teeth, who

sometimes laughed
themselves out

before you
could catch them.

Bitter in the Belly is a devastating tour de force. Elegant and graceful, it is replete with loss and love – with the stillness that comes of wreckage.mRb