A review of Just One Suitcase?! by A. Margaret Caza 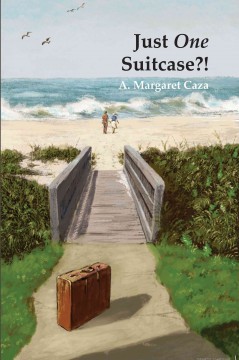 Just One Suitcase?!
A. Margaret Caza

This is a memoir about travels, but not of the Marco Polo variety. The author and her husband, and sometimes the kids and the in-laws, mostly went to Florida for a few weeks in wintertime. If that sounds thin, perhaps it is. But the “adventures” here are so fondly recalled, and related with such naturalness, that things are nicely thickened up and it’s hard not to cheer the little adventurers on.

At the very least, anyone who has ever holidayed by car will breathe an “I’ve been there” sigh at the recollections of missed exits, arguments over souvenir stand stops, and grim, last-chance motel rooms found long after sensible people have stopped for the evening.

The author is A. Margaret Caza, born Margaret Crawford in Campbellton, N.B., in 1930, and married in 1952 to Renaud Caza – a Caza of the Cazaville Cazas, Cazaville being a farming community southwest of Montreal where Renaud operated a successful agricultural and construction equipment business. She wrote of their life together in an earlier book entitled Walk Alone Together. Oddly, Margaret’s biggest travel adventure was before she and Renaud were married, when she was trying to decide whether to marry him at all. A spell as a secretary at a U.S. Air Force base in Greenland was just the thing to convince her to tie the knot.

This book is a reminder of the value of meeting life’s little challenges with tact and openness.

The couple’s early travels were relatively adventuresome, even if the author’s recollec- tions now don’t always match the grandeur of the locations. Her only comment on Chitzen Itza was that it was “beyond hot and humid”; Spain in the off-season was unrelentingly rainy and cold.

She does make the point, however, that a local guide – in Spain, for the Cazas, it was a taxi driver named Pepe – can make a sojourn in a foreign locale endlessly easier and more interesting. And she takes the occasion to remember her pleasure, after getting out of the rain and into a good hotel, at “all the lovely warmth that central heat and a good husband provide.”

But after that, it pretty well settles down to wintertime trips to Florida, examples of Canadians’ – and especially French Canadians’ – preference for warm sun and sandy beaches over frozen pipes and three feet of snow. Of course, the trip is never straightfor- ward. Renaud’s reluctance to gas up and Margaret’s tendency to doze when she’s supposed to be navigating ensure a certain excitement. And the likelihood that the car is packed to excess with two or four or more family members, each with his or her own likes and needs, adds colour. Still, it’s not the substance of the recollections as much as the warmth with which they’re remembered that distinguishes the book. Accidentally going into the ladies’ room, or dis- agreeing on the importance of bringing boxes of oranges home from Florida are hardly earth-shaking events, but recalling them in an affectionate glow can be charming.

Eventually, the Cazas bought a mobile home in the Québécois’ favourite home-away-from-home, Fort Lauderdale. And the annual stays there, however harried the comings and goings, were much-anticipated and impor- tant intervals. It is “this annual renewal,” Margaret writes, that “sustains a harmonious relationship. A relationship that had merely, in fact, been relegated, like so much rutaba- ga, to the root cellar of mak- ing a living, for a general ripening, to be looked at anew by the grace of a winter vacation.”

It ain’t On the Road. But Just One Suitcase?! is a reminder of the value of meeting life’s little challenges with tact and openness – and looking back on them with a smile. mRb