A review of Invisible Sea by Kevin Bushell 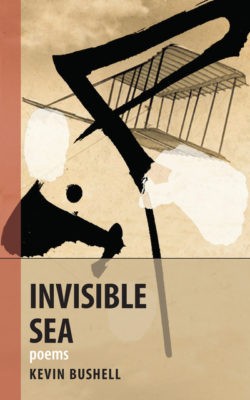 Kevin Bushell’s poems trace a history of aviation. In Invisible Sea, his first poetry collection, Bushell reflects on what it means to be airborne, shifting perspectives between men and objects of flight: Wilbur Wright, Icarus, bats, a kite – even the odd math equation. In fact, whereas the first section “Kill Devil Hill” centers on the Wright brothers’ exploits, and the second “Birdmen” on myth, literature, and history, the third, “Invisible Sea,” presents poems on math theorems that contribute to our understanding of aerodynamics, such as “The Reynolds Number, 1883 pVD / u = 2,300” in which “turbulence is predicted.” Bushell orders these math poems chronologically according to their discovery date, to finally present human flight as an ancient problem with a modern solution.

Of course, the problem of human flight is not limited to mechanics and historical narrative. Bushell gestures towards flight as vocation and hubris in a tone equally reverent and casual, though some pieces work more than others to foster this paradoxical sense “not of flight but falling.”

In the end, Bushell achieves what he sets out to do: write a history of flight and aerodynamics. The drama of this “ageless problem” occasionally verges on the didactic, as the collection’s strength remains its research; if the poetry is straightforward where it might be more formally engaging, it is suitable to Bushell’s historical angle and fictional undertaking.mRb