Leaving the Shade of the Middle Ground

A review of Leaving the Shade of the Middle Ground by Laura Moss, editor and F.R. Scott 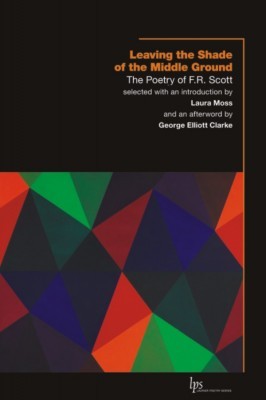 Leaving the Shade of the Middle Ground
The Poetry of F.R. Scott
Laura Moss, editor and F.R. Scott

Public intellectual, lawyer, and poet, F.R. (Francis Reginald) Scott was one of those truly great and spirited Canadians. The Canadian part is important, not just because he was born and lived here, but because he spent his life fighting and writing for what he believed was best for his country and its people. He taught, practised law, and founded and contributed to numerous publications and societies. Born in Quebec City, he defended bilingualism and took a serious interest in the work and translation of Canada’s French poets. During the Depression, he helped found the League for Social Reconstruction, and, in later years, he participated in the founding of  the Co-operative Commonwealth Federation and eventually the National Democratic Party. He was twice awarded the Governor General’s Award, once for his poetry and once for his political writings.

As both his bio and his poetry show, F.R. Scott spent his life railing against hypocrisy and corruption. To read his poems today is to find strikingly relevant verse, especially to a population increasingly fed up with a status quo where – as the poet George Elliot Clarke puts it in his afterword – “the Golden Rule is the rule of gold.” Scott will be very interesting for readers living in the era of the Occupy movement, frustrated with economic inequality and government corruption at all levels. Indeed, he will be quick to win over such readers with astute lines like these from “Social Notes II” (1932):

Come and see the vast natural wealth of this mine.
In the short space of ten years
It has produced six American millionaires
And two thousand pauperized Canadian families.

After the strike began
Troops were rushed
To defend property.
But before the trouble started
Nobody seems to have bothered
To defend living standards.

Scott urged others to his cause and denounced apathy as in “To Certain Friends”:

Above all they fear the positive formation of opinion,
The essential choice that acts as a mental compass,
The clear perception of the road to the receding horizon.

For this would mean leaving the shade of the middle ground
To walk in the open air, and in unknown places;
Might lead, perhaps—dread thought!—to definite action.

As long as your politics are in line with Scott’s, it’s hard not to like his cheeky poetry. That said, if you’re most interested in the poetry itself, you might object to it being put in service of Scott’s political agenda. In his afterword, George Elliot Clarke provides a careful examination of Scott as a poet. He explores his influences and mentors, and though he respects his poetry, and is sympathetic to his agenda, he concludes, “one loves Scott most when he most frank, most joyous—as in … ‘Miranda’ (1926), a poem whose singing puts an end to preaching.” From “Miranda”:

She’s saner than September,
More single than the sky.
I do not think that someone
Could love her more than I.

I saw her on a Sunday
So maiden on a path
It was a peal of laughter
To understand her worth.

That night the thing that happened
Would set an aunt to stare:
We lay distinct as spinsters
Yet close as kisses are.

With Leaving the Shade of the Middle Ground, the Laurier Poetry series certainly seems to have fulfilled its mandate. There is the hope that more readers will encounter F.R. Scott, an artist who gives a poetic voice to political concerns that are evermore relevant, and, who, when he’s at his best, writes the kind of poetry you’d like to memorize, just in case you ever meet a girl named Miranda.