A review of Let's Not Talk Anymore by Weng Pixin

The title is a tip-off, intended or not. There’s not a whole lot of dialogue in Let’s Not Talk Anymore. There aren’t a lot of words, period. In the incandescent work of Weng Pixin, it’s the images – and the silences – that do the heavy lifting. Weng is a Singapore-based artist and graphic novelist whose 2020 debut, Sweet Time, drew across-the-board acclaim for its episodic, finely observed, emotionally acute depictions of relationships under various degrees of stress. A mere year later she has followed it up with a work that not only consolidates that book’s strengths but builds on them considerably, using a broader canvas and taking formal and stylistic risks that pay off.

Let’s Not Talk Anymore is structured as a series of vignettes from the lives of five fifteen-year-old daughters, proceeding matrilineally from the author’s great-grandmother in 1908 through her grandmother in 1947, her mother in 1972, herself in 1998, and finally a projection of a daughter of her own in 2032. Moving both forward and backward in time, the setup is perfectly suited to a study of how the best and worst aspects of families can be passed from generation to generation, how mistakes and dysfunction echo down the decades, and how the most basic rights of female self-determination have been the subject of struggle and setback. Weng is exploring rich and timeless thematic ground, and she fully does it justice.

It’s not a tidy lineage Weng traces: there is adoption, abandonment, family rupture, involuntary migration. Settings are almost entirely domestic; broader history is implied, never stated, as when one character takes an enforced boat journey from impoverished southern China to Singapore. The milieu is overwhelmingly female, with males limited to peripheral roles: predatory strangers, well-meaning but ineffectual and taciturn fathers, irritating younger brothers. Creativity and artistic expression are alternately smothered and nurtured; friendships are rare and fragile, constrained by household responsibilities. Hope is built on the most delicate of foundations: for these girls, the attachments that can’t be forged with other people are instead cultivated with birds, insects, animals, flowers. 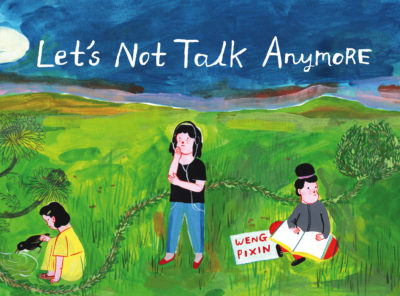 As with all the best graphic novels, this one is an objet d’art as much as it is a conventional book. Weng occupies the more painterly end of the comic art spectrum, employing what looks like a combination of oils and watercolours in a style that’s both dazzling and soothing in the fullness of its palette. Occasional full-page panels, extending right to the edge of the paper, have the power of stand-alone canvases. One, of a mynah bird against an abstract red backdrop, brings to mind the work of Marc Chagall. Perspectives vary from extreme close-ups – especially effective with a recurring grasshopper character – to long shots that vividly convey the daughters’ place in the world. An image of a mother and child toiling in the middle of a vast field speaks volumes about isolation, exploitation, and connection, a whole way of life, all at once.

When words are truly needed, they’re all the more effective for their sparing use. Near the end, when a mother and her children talk openly about a troubled ancestor (“I wonder […] what it would be like to live in a world where you have no control over your life.”), their candour feels fully earned because we have seen how a young woman’s ability to voice her innermost thoughts has taken generations to establish. Let’s Not Talk Anymore is an eloquent and affecting testimony to the value of that achievement.mRb