A review of Lightness by Fanie Demeule

The unnamed narrator of Fanie Demeule’s Lightness is only one and a half years old when she has her first memorable experience of grief. She describes a visit to a seaside amusement park with her parents, where she becomes entranced with the merry-go-round. Eventually the park closes, and she is forced to leave. The narrator recounts, “Somewhere in my brain, one zone turns off, and another lights up. I understand that everything has to end, and that this is just the way things are in the natural scheme of things. I was born and I died on a wooden pony.”

Over the next eighty pages, we follow her as she descends into a kind of madness, fuelled by the determination to curb her own voracious appetite. As a little girl she scarfs down everything that is put in front of her, much to her mother’s dismay. She stuffs herself with food, but also describes drowning in her grandfather’s stories, unable to get enough of his words. What first appears as a lack of self-discipline is really the desire to cling to brief moments of elation in a life that is otherwise mundane: “Whenever I’m told that something has to stop, a part of me breaks down a little more.”

Through her early life experiences, the protagonist learns to feel ashamed of herself, of her body. She learns to exercise excessively, to push through the pain, to ration a granola bar to make it last through the day. As much as she allowed herself to revel in excess as a child, she begins to seek refuge in restraint. Denying herself pleasure becomes a kind of rite of passage. 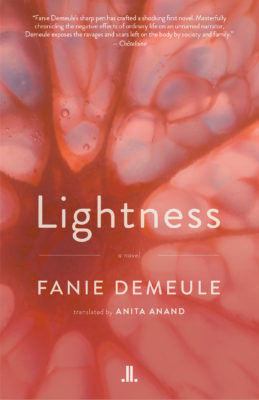 She eventually finds herself at the other end of the spectrum. What initially presents as an eating disorder morphs into the narrator’s personal mission to Marie Kondo her life to the extreme, stripping it of the joys of food, sex, and fun. She is not interested in perfecting her appearance as much as she is in the semblance of control it gives her to deny her own basic human needs.

The narrative comments on a larger fixation with mortality and the ways in which we all feign control over our lives. She describes a universal desire to stave off death, all the while knowing that it is inevitable. The protagonist seems to hold the belief that if she can exert self-control, that control will extend to the world around her, like a force field protecting her from the terrifying uncertainty of life.

Throughout the book, the narrator also describes the trials of dating, and her many harrowing encounters with men. Unable to contain her rage, she turns it back in on herself. Her body is a vessel, made use of by everyone except for her. “I am so sick and tired of everything, of me, of my body that is just too much.”

Every aspect of the book, from its plot to its construction, speaks to its title. The words are strung together delicately, reflecting on the fragility of life, questioning the purpose of this human existence. Told through a series of vignettes, the narrative imitates the protagonist’s own obsessive thought patterns, constantly coming back to ideas of purity and worthiness.

The novel ends with a final haunting image: “One day, I go down into the métro and no longer feel that I’m in danger. I don’t think about anything. I just stare at the face with the dark- ringed eyes and hollow cheeks reflected in the train window, astounded that it is actually mine.” mRb

Anya Leibovitch is a writer and translator based in Montreal. She has been featured in PeachMag and InWords Magazine’s anthology, Dis(s)ent, and is currently working on her first collection of short stories.