Dream Lives of the Disconnected

A review of Listening for Jupiter by Pierre-Luc Landry

Hollywood, one of the protagonists in Pierre-Luc Landry’s Listening for Jupiter, is heartless. Literally. Doctors removed the organ to cure his “weariness and gloom.” The operation was a failure, but the patient lived.

Hollywood’s childhood friend Saké’s parents have disappeared, so she moves in with his family. She’s not too broken up about their absence, and when she receives an envelope of money from them, she takes Hollywood on a shopping spree, buying wigs, shoes, clothes, and nearly a dozen handbags in a second-hand store. Hollywood is
a cemetery caretaker; in Montreal’s endless summer, he stealthily plants green bean seeds on graves instead of shrubs or flowers. He likes to see the plants sprout. 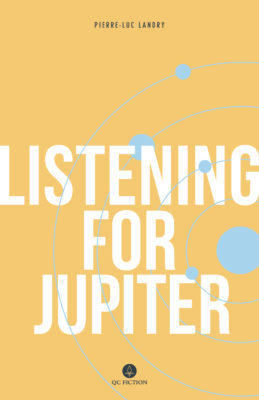 Xavier is a globetrotting pharmaceutical rep. He wears a suit to high-powered business meetings, pitching new drugs, making the big bucks. He indulges every whim that can be satisfied by room service (for example, a snack of tea and gummy bears). He takes sample pills for everything – to sleep, to calm his racing heart – but mostly in a vain attempt to fend off the anxiety that grows from the meaninglessness of his life. He walks in Hyde Park until he is too hungry, and then lies down in the snow of London’s unending winter until he is – almost – too cold.

Hollywood and Xavier’s lives are very different, but not entirely separate; in Landry’s charmingly fantastic novel of existential drift, the most important connections are made in the dream life the two protagonists share.

For a book peopled with characters who feel life is empty of meaning, who rely on pilfered pills and large quantities of alcohol for fun, who spend money as fast as they can acquire it in a desperate search for some kind of satisfaction, Listening for Jupiter and its denizens are unexpectedly sweet and appealing. They live in a world of severely disrupted climate (it is always winter in Toronto and in Europe; always summer in Montreal) and strange social and familial disconnections, yet their anxieties on these scores manifest in disrupted sleep and erratic hunger – they do not turn their dissatisfaction outward. They are not totally unaware of the world around them, but they do not carry it on their shoulders; their own inability to find a compelling path in life is enough to preoccupy them. The tone of Listening for Jupiter is somehow gentle bildungsroman more than fierce dystopia.

One might note that the characters’ feelings of meaninglessness could be caused by their insistently navelward gaze. But they are so thoroughly free of malice, so persistently good-natured in their friendships, so genuinely stymied by the surreality of life, that one can’t help liking them. When the dream lives in which Hollywood and Xavier feel most at home, together, draw them toward a gentle denouement, the slippery, playful narrative comes to both an end (or ends) and a beginning (or two). It’s tempting to order room service and, having finished, start again. mRb