Mai at the Predators’ Ball 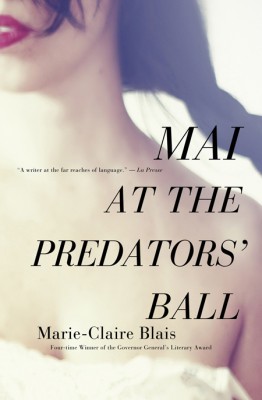 Mai at the Predators’ Ball begins with Dieudonné saying to Petites Cendres “love, my friend, love before every last bell has tolled for you,” and the book is about love, but it’s also about death, many kinds of death, the death that comes to the rejected, the forlorn, the poor, and the death that comes from old age, and yet even then do we not feel rejected, forlorn, well it depends on the life we have lived, it’s important to have a family, whether you are Mère, a grandmother, or a mother, the story is full of mothers, just like life, and they are better or worse mothers, just like life, and better or worse families, the one you choose like Yinn’s “universal family” or the one you were born with, wherever you find love that is your family, even with all its flaws, so many of the scenes in the book take place at the Porte du Baiser Saloon, a magical, very Montreal kind of club where talented artists create beautiful shows, Yinn the “Thai prince,” sewing 350 costumes a year for the singers and dancers who transform themselves from young men on the margins, thrown or chased from so many countries, finding refuge with darling Yinn and his husband Jason, under the disapproving yet loving gaze of Yinn’s mother, dear Yinn she loves them all, and this is a great pleasure for the reader, the genuine fluidity of gender, but only for men, the girls and women in this book are restrained, hemmed in, or suffer if they let themselves claim freedom, that’s the Predators’ Ball, it’s all the fathers who watch jealously as their daughters grow into their power, the fathers and the favourite sons and women who help them, and Mai with her inline skates, saving herself from the worst impulses of the damaged people around her, the world intrudes, this world is full of refugees, Africans and Haitians washing up on foreign shores, young men seeking refuge from the scars of war, children consider taking refuge in death from the pain of unhappy childhood, and then there is death by illness, and the mourning of those left behind, we see it all, this book has an exceptional range of characters, from Mai who is so young and yet so sophisticated about the kinds of power men wield over women, to Mère entering the fog of death at the end of a long life, and many people of many ages in between, that is its strength and also a weakness, it’s hard to keep them all straight, that and the striking lack of periods, there are a few (typos?), but most of the 240 pages are a single long sentence, it’s a tour de force, a demonstration of the consummate skill of the author, and it forces the reader to see all the different worlds of the many characters as connected, literally part of one long sentence, and eventually we see the worlds are connected by the characters too, as in life, but it’s hard to keep reading without the relief of the end of a sentence here or there, without paragraphs to let your eyes and mind take a break, there’s no natural moment where the text tells you, think about me, I have given you so much to digest, let it all work its way into your bloodstream, before you bite off more, no, it keeps coming at you as in life, all the death, all the struggle, all the love.
Elise Moser is a writer and editor who coordinates the Atwater Writers Exhibition and co-organizes the Holiday Pop-up Book Fair. She has published three books and is working on the next one.