A review of Maintenance by Rob Benvie 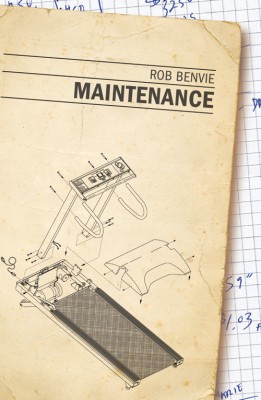 There’s an illustration of a treadmill on the cover of Rob Benvie’s latest novel, Maintenance. It works, and not just because the book features several exercise sequences: a post-conjugal violence workout, a teen’s weightlifting sesh, tennis champs sweating it up on the courts, and even some allusion to a lapsed yoga habit. But if there’s a treadmill on the cover of this book, it’s because the narrative is so largely preoccupied with the regimented rituals of human life, the motion-after-motion of it, the exertion leading nowhere.

Generally set in 1990s suburban Toronto (we know it’s the 1990s because of the constant Friends and Seinfeld references as well as the JoyCam-style brand-name product placements), Benvie’s novel has us trailing behind a rather cumbersome cast of characters – a nuclear family made up of a spacey mom with some kind of secret brain disease, a travelling dad, and their delinquent teenager. Others who populate the book include an African immigrant, his work cronies, a host of teens, Satan. However divergent their backgrounds, the cast’s individual isolation is equal in timbre and their radically dissimilar routines dole identical measures of disengagement. Affairs, diets, disease, natural catastrophes, war – nothing can shake them awake. The slow motions of their day-to-day exist in an emotional mini-mart. Excessively private, they are remote even to themselves.

And yet throughout the meandering mundanity of their existence, many of the characters encounter religion – they’ll meet a simple-minded Christian or wonder vaguely about karma. And the fact that each storyline swats at religion in this manner suggests that the narrator, if not the writer, favours some alternative approach to the one the characters act out. What complicates that possibility is the introduction of Satan into the novel. Benvie can stick Satan into the story, sure. It’s a bold, if somewhat classic move. But sometimes it seems as if the book were reaching for some kind of religious revelation, and throwing Satan into the novel certainly adds a kind of irrefutable Christian duality to the text. One could wonder, however, whether the role of Satan is to underline or undermine the disengagement of the characters. Is Benvie telling us his characters have fallen away from God?

The slow motions of their day-to-day exist in an emotional mini-mart. Excessively private, they are remote even to themselves.

But we do not witness either fall nor grace. The banality of the characters’ lives is so airtight that there is no space for any sliver of sublime. The novel’s last line, “In the end, it’s all kind of pointless, nothing,’’ in its allusion to Shakespeare (“Life’s but a walking shadow, a poor player / That struts and frets his hour upon the stage / And then is heard no more: it is a tale / Told by an idiot, full of sound and fury / Signifying nothing”), hammers home the fact that Benvie’s characters squirm aimlessly through their suburban day-to-day for naught.

It is in this book’s brief flashes of sound and fury that the story pulses. Specifically: guns shot into the air, a cigarette burning through an eyelid, a teenage rape, the outbursts of a judgmental nurse (“I think it’s revolting. How you feel so entitled. With the dream life, that you deserve the fairy-tale ending. The women I work with downtown endure real pain every day. Horror stories you wouldn’t believe. Crack pipes in their vaginas. In our safe little pockets, we just don’t know. And life, to people like you… it’s just a barbecue”). These are moments not only of passion, but plot. These ferocious eruptions of volatility contrast the novel’s overarching humdrum mood, of course, but it’s the consequences these actions force on the characters that make an off-scene shift readers aren’t privy to, but can’t help imagining.

The trouble with 400 pages of meaninglessness is that readers may be left unmoved, wishing that something, anything, would happen; just wanting someone to get off the treadmill and act with conviction. mRb

Melissa Bull is a writer and translator based in Montreal.