A review of No Crystal Stair by Mairuth Sarsfield

During a wave of rising interest in the history of Black communities in Canada, the re-edition of the late Mairuth Sarsfield’s 1993 novel No Crystal Stair is timely and welcome. The book is an homage to Sarsfield’s home neighbourhood of Little Burgundy and is named after a line in the famous Langston Hughes poem, “Mother to Son.” The 2021 edition includes a beautifully written preface by Dorothy W. Williams, author of Blacks in Montreal 1628-1926: An Urban Demography, who, like Sarsfield, grew up in Little Burgundy.

Rich with romantic imagery, No Crystal Stair is set in 1940s Montreal. Sarsfield follows the Willow family, who have just moved onto rue des Seigneurs in Little Burgundy. Marion Willow, a loving and passionate single mother determined to give her daughters what she considers a proper upbringing, is unwavering in her attempts to provide her family with what they deserve. Teaching her daughters to be discerning and righteous, Marion expects them to grow up to break the proverbial glass ceiling. Otis, a family friend’s nephew and an older brother figure to the girls, joins the Willow family in their new home while working as a porter on board the trains of the transcontinental railway. 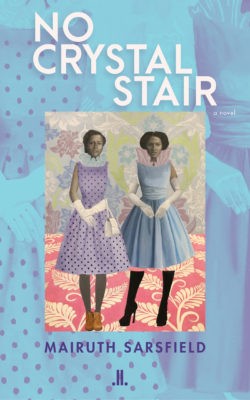 Amidst community picnics, celebrations, and tragedies, the Willow family gradually builds intimate and complex relationships with their new neighbours, including the two occupants of the Russian Ballet Academy next door, and an elegantly mysterious woman who lives down the street. The young Willow girls, obedient daughters brimming with compassionate imaginations, each curious with a strong sense of self, lead eventful and creative lives within and outside of their home, tackling obstacles of discrimination, isolation, and orphanhood in their own ways.

In an almost encyclopedic fashion, characteristic of someone with a background in research, Sarsfield describes the streets, steep hills, neighbourhoods, restaurants, grocery stores, and even backyard sheds as they were in the 1940s, allowing its present-day dwellers a peek at an unforgettable Montreal. Not only are we invited to glimpse into daily life in Black Montreal during the Second World War, Sarsfield also makes sure to include significant events that took place in North America, the Caribbean, East Asia, Europe, and the UK – from the genocide of Indigenous peoples, anti-Black racism, and Japanese internment camps, to the German occupation of the Channel Islands during the war.

Making the mistake of head-hopping in her narration, the book follows many different characters as they navigate Canada’s racist society while dealing with their own internal conflicts. While the bonds between the characters are undeniable, the lack of catharsis usually achieved through character development leaves the reader with more than a desirable amount of curiosity. The plot itself is so difficult to recognize that one might not realize the climax has come and gone until having finished the book. Though these aspects of the book were frustrating at times, there are equal amounts to be appreciated. Sarsfield effectively illustrates just how casually Black people experience racism in their daily lives – something not easily discernible to those who don’t experience it.

Touching on socio-political issues such as racism, classism, war, and “passing” as white to survive, No Crystal Stair’s focus is not solely on the oppression experienced by Montreal’s Black community in the 1940s. Sarsfield conveys the deep connections and solidarity within and beyond Little Burgundy. It’s a story of love, grief, connection, and forgiveness – a reminder of the importance of passing down knowledge, and the joys of being Black. Despite mistakes not uncommon for a debut novel, this work of historical fiction is an undeniably significant point of reference for readers interested in taking a more intimate look into the Black history of Montreal.[mrb]

Val Rwigema is a multidisciplinary artist and writer currently living in Montreal.