The Play's the Thing

A review of Manikanetish by Naomi Fontaine

Manikanetish, the second novel written by the Innu First Nation writer Naomi Fontaine, is ostensibly about a young woman, Yammie, who decides to leave her life in Quebec City and her lover, Patrick, to follow what she believes is her destiny. That destiny is an “inevitable” return to the “tiny little village” on Quebec’s North Shore and “the thorny, sandy landscape surrounding it” to teach in her small Innu community where she was born. The plot of Manikanetish would thus seem to invite its readers to expect a narrative trope whereby its protagonist forever changes the place and the people she visits. Indeed, even its English publishing house would seem to market the book in this way. However, the narrative renders clear that the transformation process is actually mutually constitutive: Yammie is equally altered by her own experiences there and by the students whom she teaches. 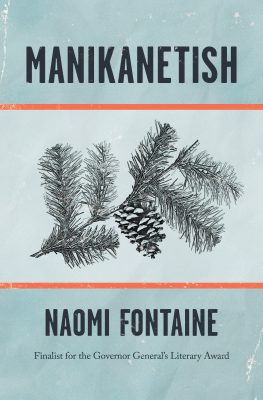 A finalist for the Governor General’s Award in 2018, the book was translated from the French by Luise von Flotow, who captures in English the lean, spare, poetic phrasing and the visual imagery that are a function of Yammie’s perspective. For example, Yammie observes how the students adopt costumes for a play that are “simple and in good taste. Lace at the neckline and the wrists. Crinolines puffing out the skirts. Royal colours.” The simplicity of these observations is in striking contrast with the actual lines the students are committed to memorizing for Le Cid, by the seventeenth-century French dramatist Pierre Corneille. As the students enter into the world of the play, with all its moral complexity, Yammie enters into theirs – with their equally multifaceted, poignant familial or communal events, relationships, and conflicts. It is these conflicts that she endeavours to navigate, at times with an understanding that has been impaired by her protracted absence from Uashat and therefore an awkward ability about how to approach them. The maxim she invokes in relation to the play might as well apply to how she approaches the tragic moments of her and her students’ lives: “We just needed,” she observes, “to emphasize the comic aspects of the tragedy a little more.”

Divided into the three sections, the novel has short but pithy chapters – more properly vignettes – that demonstrate Yammie’s shifting consciousness. These chapters often share the same titles, showing by virtue of repetition how she returns to a person or a moment with a renewed consciousness. The first section, “What I Didn’t Know,” involves her arrival in the village, her fears that “people at home wouldn’t recognize [her],” and her anxiety about her inability to speak in Innu. In the second section, “Life Is a Struggle,” she shifts from making judgments or “ironic comments of a sometimes inappropriate nature,” to learning about the students, their desires, passions, and talents. Through communal loss, Yammie yet feels that something is born: “Something like the beginning of trust.”

Consequently, the principal of the school enjoins her first to organize this theatre production and then, by the third section, “The Things I Can’t Change,” to accompany some of them on a week’s trip to Nutshimit, which she initially resists. During the trip, however, the students come to refer to her by her first name, rather than “Madame,” and she realizes that “we’d entered another space.” The theatre assignment marks a profound shift in her relationship with her students, allowing by the end of the school term – and of the narrative – Yammie’s rediscovery of her place within the community.mRb