A review of Mayonnaise by Éric Plamondon

In Hungary-Hollywood Express, the first book of Éric Plamondon’s philosophical 1984 trilogy, protagonist Gabriel Rivages fends off suicidal thoughts with obsessive research on the life of Olympic medallist and Tarzan film series actor Johnny Weissmuller. Rivages’s ruminations are intermixed with reflections on himself, Samuel de Champlain, Einstein, and Richard Brautigan, but Weissmuller served as the novel’s pole star, a fixed point to which the otherwise fragmented narrative could always return.

With Mayonnaise, the second book of the 1984 trilogy, the poet and novelist Richard Brautigan becomes Rivages’s central fixation. Among Plamondon’s forest of factoids about Camus, General Jodl, and Saint Antoine, about the Remington Rifle Company and the Singer Sewing Machine, Charlie Chaplin and Vladimir Nabokov, Brautigan emerges as a commanding influence. Like Brautigan, Rivages suffers from chronic depression; and like Brautigan, Rivages is a writer. Brautigan committed suicide. It was already established in the first novel that for Rivages, writing is a means of staving off thoughts of suicide. 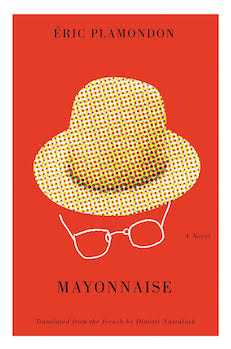 In Mayonnaise, things seem to have become worse. While the book begins with Rivages as a first-person narrator, it soon shifts to the third person, as if the protagonist can no longer confront his own thoughts head-on. Indeed, the deluge of Wikipedia-style chatter about all things under the sun threatens to completely drown out the thoughts and activities of the protagonist. The reader begins to wonder, Well, who cares if Gaget, Gauthier & Company produced the hammered copper plates covering the Statue of Liberty? But Rivages does, because as a young man weathering his first suicidal impulses, the lesson he drew from Camus’s Myth of Sisyphus was that he should keep living out of curiosity, to see what might happen next.

What happens next is frequently mind-numbing boredom – the boredom familiar to anyone stuck in a nine-to-five office job. Between spam and tedious work-related emails, respite is always there for Rivages: “Thanks to YouTube and Wikipedia, I can regain some of that lost time.” It’s an endless search for meaning in a meaningless society.

The other day, she explained to me that people are sad because they don’t realize when they’re being manipulated. They don’t see that reality is elsewhere, that everything is nothing more than a representation. That the world is but the image of a totalitarian system that only profits a minority. That’s how we went from Plato’s Allegory of the Cave to Freud and from Heidegger to Lacan.

Rivages learns that Brautigan has a connection to Quebec: “Michael Kehoe, born in Montreal, is his maternal grandfather.” It’s these hinge-like chance incidents in life that seem most inspiring to Rivages (and perhaps to Plamondon); again and again we’re treated to a yarn that eventually leads to a zinger like that. Another example is the strange connection between Remington rifles and IBM Selectric typewriters. These zingers don’t really prove or affirm anything. They simply indicate the sheer randomness of human fate, and somehow, Rivages takes comfort in that.

Brautigan’s presence in Mayonnaise is everywhere – not merely in the various anecdotes Plamondon chooses to relay, but in his response to the way that Brautigan wrote. Indeed, Plamondon explicitly pays homage to Brautigan’s The Tokyo-Montana Express in the title of the first novel of his trilogy, Hungary-Hollywood Express. Upon reading The Tokyo-Montana Express, Gabriel Rivages is transformed. “It’s a shock. This casual writing style with its whiplash-inducing trapdoors, its slaps, its rhythms. It fills his thoughts and reconstitutes his life.” Not content to simply write about Brautigan, nor to write like Brautigan, Plamondon delivers a zinger concerning the strange connection between Brautigan and Rivages that will leave the reader wondering just where truth ends and fiction begins. mRb