The Unbearable Lack of Creativity

A review of Mediocracy by Alain Deneault

When Alain Deneault uses the word mediocre in his new book-length essay, he is not describing something (or someone) inferior or incompetent. Rather, he is talking about mediocrity as it defines the actual average, the mean of things. He is taking aim at a society where this average “has been granted authority.”

We now have a world-system that demands its citizens be absolutely average and aspire to nothing higher, Deneault argues; we live in a mediocracy. The system rewards the intellectually lazy and submissive (as long as they remain competent and productive), but it punishes and ostracizes the creative thinker, the “foolhardy hotheads” who “[denounce] the workings of institutions of power.” Deneault traces the beginnings of mediocracy to the destruction of craftsmanship by the Industrial Revolution, which required standardization to facilitate production on a mass scale. The reliance on an ideal average has bled into higher learning, the economy, culture, and politics. The result: a hegemony that is intolerant of anything but itself, an extreme centre. 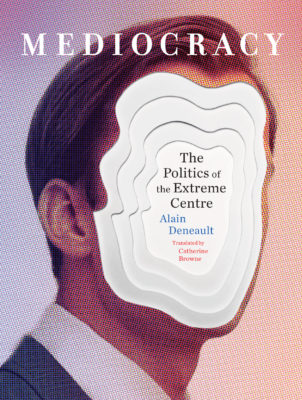 Mediocracy: The Politics of the Extreme Centre is fashioned from two works first published in French by Deneault: La médiocratie (2015) and Politiques de l’extrême centre (2016). Catherine Browne’s excellent translation showcases Deneault’s witty style and biting critique, which jumps nimbly from a consideration of early-twentieth-century philosopher Georg Simmel’s “The Concept and Tragedy of Culture” to impassioned commendation for a 2012 installation by artist and (now) Concordia University faculty member Mitch Mitchell.

Mediocracy casts its net wide. Deneault eviscerates the university as the production line of future workers for corporations, a place where advancement is predicated on “playing the game,” not the result of original thinking or research. He calls out the global ruling caste, which “literally hovers above all things” as its members fly across the world to ink just-in-time deals, the benefits of which will never trickle down to their workers. He traces how we repress honest thought and feeling so as to not jeopardize our financial well-being (at work, for example), and how this silence carries with it a heavy psychic burden.

But Deneault’s concept, as I understand it, doesn’t possess the explanatory power he seems to think it does. Most of the problems Deneault describes so vividly are the fault of the neoliberal order, or more fundamentally, of capitalism itself. Is mediocracy the culprit when police fail to investigate the crimes of the wealthy and politically connected or when Revenue Canada audits service workers instead of going after major tax evaders? At root, these things are symptoms of a grossly unequal economic system that, by design, concentrates power and wealth on the backs of the property-less.

Deneault is most engaging when he dissects specific, local events or issues. He relates the story of an ostentatious birthday party for Paul Desmarais, patriarch of the ultra-wealthy Desmarais family, who wield tremendous influence in Canada and Quebec. It’s a stunning and damning portrait of oligarchic power. So too is his analysis of the Lac-Mégantic disaster and the role of the artist as a “social worker” and art as an “anaesthetic,” obscuring the system responsible for the tragic destruction.

Deneault’s critique of the idea of governance is another welcome contribution, even if it illuminates a form of regime in steep decline. He argues that the mediocratic class rules through governance, which he describes as a mirage of “partnerships between the various and unequal members of ‘civil society’ […], the private sector, and a state now viewed as no more than a peer.” There is no discernable centre of power in the extreme centre, we’re all of us – rich or poor, men or women, white or of colour, CEO or unemployed – playing the same game. The truly powerful are “ghosts”: they pull the strings of our communities and rig the game in their favour, but if we tried to pull them down to our level to demand reparations, we’d find them untouchable, their capital evaporated offshore. It’s an accurate description of liberal regimes, exemplified today in Trudeau’s Canada.

But the extreme centre is now being challenged by the extremes of the far right. Elected strongmen advance right-wing agendas from Asia to Latin America. In at least six European countries, extreme right political parties control or are part of national governments. Donald Trump, who campaigned on a promise to “Make America Great Again,” defeated Hillary Clinton, an exemplar of the extreme centre. His short tenure has been the mirror opposite of the “balanced measures” and “compromise” that characterize the governance model of the mediocracy. We are now seeing a similar upheaval in Ontario.

“Mediocracy,” Deneault writes, “encourages us in every possible way to doze rather than think, to view as inevitable what is unacceptable and as necessary what is revolting.” How terrifying that the rising from such slumber has largely not been towards creative, collective liberation but away from it, to the tyrannical violence of homophobia, misogyny, racism, and xenophobia. mRb