A review of Mend the Living by Maylis de Kerangal

One of the doctors in Maylis de Kerangal’s Mend the Living likes to brag about the year of his birth. It was 1959: the year in which Maurice Goulon and Pierre Mollaret took to a podium to make an announcement that can be summed up in a single “slow cluster bomb” of a sentence: “the heart stopping is no longer the sign of death.” A redefinition of death, a statement that would open the door to organ transplantation.

Mend the Living, here translated into English by Jessica Moore, explores the processes, both physical and emotional, that surround a heart transplant, taking us through the twenty-four hours following a car crash that leaves a young surfer named Simon Limbeau in a coma from which he will never wake up. He is pronounced brain-dead before his mother can even get his father on the telephone, and a network of medical professionals across the country springs into action – Simon’s is a viable heart for transplantation. 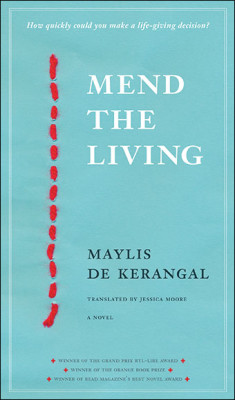 The narrative is expertly paced, carrying us through the tense and “ultracalibrated” hours that follow. We meet a series of doctors, nurses, and coordinators, and are given a glimpse into the personal lives of each one: the nurse, a little dazed from a late night out with a new lover; the organ donation coordinator who sings arias every morning. These brief digressions add another layer to the story – the medical side of the hyper-controlled transplantation procedure comes alive when the people involved at every step along the way are real characters.

De Kerangal writes in long sentences that heap clause upon clause, descriptive phrases that would seem to be at odds with the efficient, streamlined language of the processes they describe. And yet, by creating the sense of narrating events almost in real time, these long, rhythmic sentences convey something important about the passage of time on a day in which every moment, every detail, is critical. The temporal experience of the highly calibrated medical procedure seems to mirror that of shock and loss. Simon’s stunned parents are not permitted to fast-forward through this most horrible day; they have to live every second of it, each one precisely accounted for by a team of doctors. These seemingly endless sentences occasionally almost teeter over into the melodramatic, but the novel is never mawkish. Jessica Moore’s translation work here is exceptional. French tends to be more forgiving of the endless sentence, the series of clauses, but de Kerangal’s page-long phrases are rendered deftly and gracefully in Moore’s English translation.

The text moves easily between the laconic borrowed English of young surfers, the abrupt dialect of hospital employees, the visceral language of grief and loss, and patient descriptions of the natural world – de Kerangal’s characters are astute observers of flora and fauna, birds, the sea and the sky. The utilitarian language of medicine, language that “standardizes tragedy for better efficiency,” becomes rhythmic, almost beautiful, as de Kerangal creates an unexpected fluidity out of an eclectic blend of vocabularies. Here too, Moore’s translation is sensitive and precise.

The story of Simon Limbeau’s heart plunges us deep into the mechanics of the transplantation procedure, but the overarching questions of the novel inflect every step along the way – how do we conceive of death, “the most pure of all absolutes,” now that it is no longer so absolute? And what is it to be alive, when the boundaries between life and death are blurred? Mend the Living is a moving exploration of the strange in-between time created by the redefinition of death – a day of impossible decisions, strict procedures, and gifts not exactly given.