A review of Mermaid Road by Louise Carson

“It’s easy to romanticize the sea,” writes Louise Carson in Mermaid Road. While the evocative seafoam colour of this hand-bound chapbook does well to immerse the reader in a romanticized feeling of the sea, the story emphasizes the practical considerations a mermaid and her family must make when getting by in the twentieth century. As such, the title of the book points to these considerations – how does a mermaid travel upon a road? At the same time, what is life’s journey when not travelled along a road? This simultaneously ordinary and fantastic story is constantly engaging in ideas of the real and unreal. Like the sea Carson brings to life, the story is “pulling, pushing” at these ideas over and again.

When the protagonist Anne is about to be born, healthcare specialists suspect she’ll be stillborn. After all, parents John and Sarah are middle-aged and the mother experienced nausea throughout her pregnancy. Nevertheless, baby Anne enters the world weighing seven pounds, eight ounces, with good vital signs. And a tail. Perhaps Sarah’s discomfort was due to seasickness. 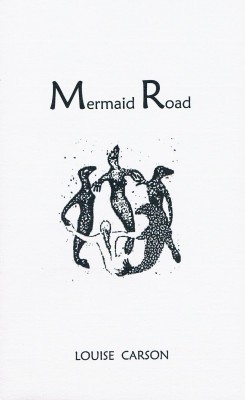 The doctors monitor Anne’s health closely and urge John and Sarah to consider surgery to make Anne “bipedal, land-ambulatory.” The surgery to accomplish this will take ten to fifteen years to complete. While hospital officials promise the couple it will be of no cost to them, they are concerned about the high toll multiple operations will take upon Anne over such a long time period. The couple refuses the hospital’s offer and eventually avoids further contact with the healthcare system. They discreetly liquidate their financial accounts and leave town to make a new life in support of Anne’s needs.

Financially stable but not rich, John and Sarah build their life around Anne. John remodels the bathroom at home so that it connects with Anne’s bedroom and finds the biggest bathtub he can for her to pass the time in. They raise her in a caring environment and spend the bulk of their days by the tub and various bodies of water.

One day, Anne is old enough to swim away and her life’s journey takes off.

As mermaid, Anne is capable of singing, crying and grunting, but she cannot speak. The humans she encounters as a mermaid are compelled to ask, “What does she eat? Can she speak and, if so, in what language?” These questions are beautifully illustrative of a subtext that questions our instincts for caring and survival as well as language and the strength of words for subsistence and enrichment. When, at various times, she is forced to stay on land, Anne is adaptable and takes a human form. As displaced human, Anne is taught to write by her chosen family, Mary and Janet. They are heartened to “have someone to share their language; they’ve lived so long in this foreign land.” Anne’s pathways are frequently fraught with contention and a struggle for power, particularly in the violence she suffers at the hands of various seafarers and entrepreneurs. Anne moves from freedom to captivity and back again. Carson captures the tension between possession and dispossession of body and land sensitively and provocatively. In the wake of killing a man in self-defence, Anne comes to the realization that, “…it’s not her hair, her song, her breasts or tail that make men want her. It’s all of her put together; the fact of her existence makes her irresistible. But it’s also something in them, that they are so eager.” It’s a sad epiphany and powerful consideration. As an evolving being struggling through life, Anne bears the cross of her namesake: she is humble and ordinary; she is queen-like and extraordinary.

The scenery in Mermaid Road is folkloric, populated with humans, fish, sirens, seal people, and merfolk. This tale is about a calling to the sea, about the pull of the wild, of nature, of land and people. Carson embodies this in many ways. Her narrative prose is poetic and awash in moments of prose-poetry. The prose at large is interspersed with formal bodies of poetry that are liquid and lyrical and complementary. The poetic interludes are dramatic and carry a narrative force that would be well suited to the stage. The poems stand within the story as sentinels and lighthouses, signalling the yearnings of familial and romantic love, of desiring and of beckoning.

Although the telling of this mermaid’s life on land and in water is in part an ode to utopian places, in the end, it is also an illustration of the messy order, the supremacy, and the beauty of nature. All of the dualities sewn throughout Mermaid Road illustrate the ubiquitous power of earth’s natural elements. Mermaid Road is rich with literary salt and ambience.