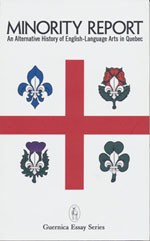 On September 22–23, 2011, a segment of Quebec’s English-language arts community – writers, publishers, dancers, musicians, actors, visual artists, etc. – gathered for the second State of the Arts Summit organized by ELAN (the English-Language Arts Network). Its purpose? To determine what the community can do over the next few years to survive, grow, and flourish.

After planning for a collective future, the Summit ended with the launch of the book Minority Report, a loving look at the history of English-language arts in Quebec. Edited by Dimitri Nasrallah, the book is the paper version of raev.ca’s history section. Created by ELAN in 2010, raev.ca (Recognizing Artists: Enfin Visbles!) is a website that provides a snapshot of the community: 154 ELAN members have profiles; there is an online map of English-language shows, venues, and artists in Quebec; and brief histories of the different disciplines represented by ELAN are available. It is these histories – published as is, without any additions, though without all the pictures – that became Minority Report.

The book is very enlightening: in the dance section, we learn that Les Grands Ballets Canadiens de Montréal was, in the 1950s, “one of only three Canadian companies to offer its dancers regular salaries;” and the music section reveals that Emile Berliner, developer of the gramophone, founded, in 1899, the first North-American record-pressing plant in Montreal. Interestingly, and perhaps the point of this exercise, it would appear that some of Quebec’s artistic disciplines had a brush with death at one point in their respective history (“Le théâtre Anglophone à Montréal: pratiquement mort” declared La Presse on December 7, 1985) before resurrecting and thriving once again.

Unfortunately, these essays are somewhat superficial, giving a very quick – yet important – summary only. And though they are extremely interesting, readers who aren’t familiar with a given discipline might be frustrated with the long lists of unknown names.

As the closing event for the Arts Summit, the launch of this book was a great way to hand over the torch to current artists. The histories chronicled in Minority Report end in 2010, but they create a platform from which current artists can keep developing English-language arts in Quebec. mRb