A review of Moms by Yeong-shin Ma

Yeong-shin Ma has penned nine books in his native Korean, but Moms is his first to be published in English. The cartoonist is a self-described late bloomer, living at home until he was almost thirty, when he was told to move out by his mother, a divorced cleaner and mother of two other adult children. Ma was a member of what is known in South Korea as the kangaroo tribes, the many adult children who live with their parents to save money until they get married.

According to the book’s afterword, the cartoonist found doing his own household tasks a frustrating and difficult ordeal, and while performing some mundane chore, he reflected on his mother’s life and developed a newfound appreciation for her. He thought it would be fun to create a book with his mother as the main character. Curious about her life, he gave her a notebook and asked her to write honestly about herself and her friends.

Within a month, his mother had returned with a notebook filled with the unfiltered details of her day-to-day life and musings. The cartoonist has stated that he knew that his mother could be daring, but was surprised by just how intense the sex lives of middle-aged women could be. He turned his mother’s notebook into the hilarious Moms, a 372-page graphic novel with black-and-white illustrations and etchings to create shading and texture. 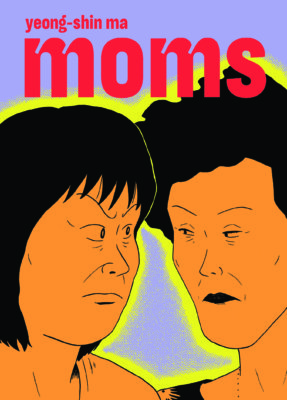 The graphic novel follows the cartoonist’s mother, the plucky, fifty-something Soyeon, and her female friends. Soyeon’s current boyfriend is the handsome Jongseok, a man ten years her junior. Although Soyeon claims that she has “high standards,” she spends her time dithering about what to do with Jongseok, a waiter with a serious drinking problem. He is two-timing Soyeon with a much wealthier florist and plays one woman off the other until there is an altercation. Soyeon’s three friends do not fare much better, frequenting sordid nightclubs, all the while hoping to find “the one.” Predictably, they end up with equally desperate men who seem to make off with a lot of their money.

But the drama does not end there. Soyeon works for a cleaning company. The manager, a handsy predator, tracks his employees’ every move with cameras and times their breaks. A former employee and victim pickets the building with a sign explaining what the manager did to her until she is approached by a reporter. The manager is later replaced, but Soyeon is let go for trying to form a union and speaking out about the working conditions and manager on a radio show.

Moms is a refreshing look at the lives of a group of gutsy middle-aged women who, in the face of adversity, hold fast to their hopes and dreams. The character of Soyeon is an enjoyable straight shooter who has no patience for other people’s bluster. Some of her brash replies are so direct and unexpected that I laughed out loud. Just as hilarious are the comments she makes to herself when others are speaking. There is something genuinely cathartic about women who refuse to mince their words for the sake of politeness. Readers will definitely warm to these fun women, who, like everyone else, are just looking for love. My only criticism was the book’s length: it would have been more impactful if it were shorter.

Unsurprisingly, when Moms was published in South Korea in 2015, people were in shock. This depiction was very much at odds with how middle-aged women were viewed. Apparently, older women are rarely if ever the main protagonists in pop culture narratives. Instead, they are relegated to the role of doting, nameless mothers. Let’s hope that we will soon see more entertaining books about this demographic of women, who appear to be just as invisible in South Korea as they are in the West. mRb