A review of Mont Babel by Keith Henderson

A mix of intellectual speculation, sci-fi themes, and family drama, Mont Babel is carried by the narration of Professor Benedict, a sixty-something divorced dad and retired professor of English and Epistemology (or the study of “knowing what you don’t know”). Benedict attempts to rekindle a strained relationship with his adult son, Tom – a husky engineer self-described as someone who watches Star Trek and American football, the type of person his dad would never understand. Their infrequent emails pit the two men against one another, the philosopher versus the scientist, as they attempt to answer the ultimate question: Are we alone?

Professor Benedict will send an email to his son, then wait, and reflect, for weeks before he receives a reply. All the banalities and frustration of familial conversation (on, for example, the relevancy and clout of Peter Jennings, or ruminations on why Mom left) are interspersed with conspiracy theories, extraterrestrials, wormholes, the philosophy of probability, and the absolute power of math.

Whether expounding on infinity, light, physics, energy, or quantum entanglement, Professor Benedict quotes Milton’s Paradise Lost, D.H. Lawrence, and Shakespeare. He aptly states, “I see everything through the prism of literature.” Things must be explained and referenced, and every statement Professor Benedict makes is likely backed up by Galileo or Einstein. 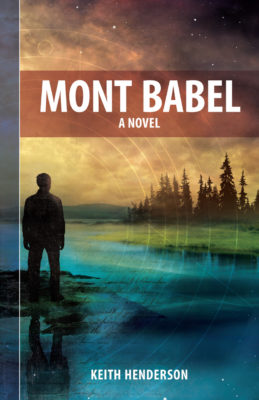 His inner dialogue, which drives the novella, reads like a comparative essay. His thought process is intelligent and deft, yet Tom chastises him for it. The two test the limits of familial futility by repeatedly attempting to convince one another that their immovable opinion is correct. Any parent will appreciate the sentiment of neutrally accepting the naive arrogance of one’s offspring, and as the narrator suggests, this is something he will “tolerate as the price of any connection” with his son.

Tom casually drops a bomb on his dad: he’s been seeing someone for seven years. Iris Doubt is also an alien enthusiast after being part of the Ariel School event in Zimbabwe (a real-life reported UFO encounter in 1994). Our narrator is then invited to meet Iris, now a geologist and adventurer, and hear her speak of her encounter at a conference in Las Vegas.

Here, Professor Benedict’s scepticism is redoubled by being immersed in a ufologists’ convention. Surrounded by keynote speakers and other “experiencers” like Iris, who would aptly fill out any episode of Unsolved Mysteries, the protagonist suffers through nearly more nonsense than he can handle.

But he can’t deny the connection between Iris and Tom, and their common desire to travel and explore the “high energy” locations on Earth, including the nearby Integraton – a domed structure built in the 1950s by George Van Tassel following instructions he claimed were received from aliens on Venus.

Overall it is difficult to develop any empathy for these characters, and, as if trapped at a dinner party with brutally dull in-laws where it’s taking forever for auntie to bring out dessert, the reader must endure the Professor’s one-sided reflections in the name of an “existential decorum” that, when one is blinded by one’s own ideologies, can never be achieved.

Mont Babel is light on action and, despite its heavy philosophical ramblings, a quick read. While a boomer audience might identify with the Professor, a more woke reader may be weary of the obstinate nature of a person being at once knowledgeable and oblivious to their societal privilege. The colonization of thought, however, is an essential underlying theme throughout Mont Babel.

Author Keith Henderson is a renowned journalist and publisher, as well as a political activist for Quebec’s official language minority. And, as a tribute to the province, the narrative culminates at the titular Mont Babel, or l’oeil du Québec: a remote meteoric crater visible from space. Much like Van Tassel, the professor receives his own unexplained communiqué in the form of a gut feeling surrounding his son’s visit to the crater at Mont Babel. When tragedy strikes, the father and son are brought physically closer together, only to reaffirm the philosophical chasm between them.

But in many ways father and son are one and the same: they just want the facts, the hard evidence, the proof. The only thing separating them is that one believes in aliens, the other does not. And though both these characters might deny the existence of any such thing, Mont Babel succeeds at explaining the mysterious sixth sense that interconnects family. mRb