Does nationalism make us small, even if we try to confine it to coffee, football, and grilled meat? Why didn’t Communism make us better? Why is ownership fatal while belonging is salvific? Who exactly is supposed to forgive you when you leave home? Do all children more or less consciously live out an allegiance to their parents’ beliefs? And are the contradictions between the remembered past and the necessary present impossible to reconcile?

Mostarghia is not a book that offers easy answers. Montreal writer Maya Ombasic’s sixth book is more intimate, a filial cri de cœur: this gathering of autobiographical scenes artfully strung together hinge on the person and the character of the author’s father.

Like nearly a hundred thousand of their fellow citizens of Mostar, in Bosnia and Herzegovina, the Ombasic family fled the city during the Balkan war. Like most exiles, they remained torn between adaptation and recollection, between being just themselves and having to define and defend their identity, between the memory of home and the impossibility of going back.

Nenad, the father, is a Mostarac through and through, and Ombasic sees him as an embodiment of the convivial neutrality that seemed typical of pre-war Mostar. Though he, his wife, and their two children live for years in Switzerland and later in Canada, Nenad takes expatriation hard: a painter with an all-too-Slavic soul, he never learns French, never buckles down to accept the socioeconomic lot of the immigrant. He drinks and smokes and rants. He glorifies Tito, falls in love with Cuba. When the war ends, he tries to go home and is livid to find out that home doesn’t really exist anymore. 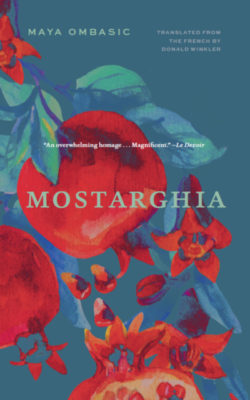 In Canada, Nenad briefly finds solace in the transcendent farmland of the Ottawa Valley, but he also thrice tries, and fails, to kill himself. The book is run through with dark humour, and some of the most fatalistic scenes are also wryly funny, as when, hearing the balcony chair tip over and the cat meow for help,

Ombasic’s mother asks her daughter, “almost casually: ‘Will you go and see if your father is still alive?’” Ombasic remembers the book backwards from her father’s death – the certificate will say cancer, but Ombasic, borrowing from Tarkovsky, diagnoses the disease as “mostarghia.” The condition of nostalgia is both dissociative and cleaving, and it is this tension that Ombasic most adeptly conveys.

Donald Winkler’s English translation, meanwhile, strives to capture the lilt of the French-language book Ombasic published, with Gallic inversions and participles, rather than translating the language beneath that book. The result is a kind of double exile, which in its finer moments captures the linguistic paradox Ombasic herself must experience, but which also results in jarring missteps.

Ombasic is twelve when the war breaks out, and nineteen when the family finally lands in Ottawa – young enough to adapt, and young enough to want to, but old enough to be aware of an indelible hybridity. She is caught between “two parallel worlds, that of the uprooted and that of the anchored.” The strain of immigration is economic, social, psychological, and linguistic. As she walks her father to palliative care, his last walk, she searches for her words, at a loss even as to “how to say sorry properly in your language, no longer really mine ever since others, like young wives unseating the older ones in a harem, have come to dwell in me, and to make me multiple.”

That multiplicity helps the young refugee survive, but it also makes her hard to pin down: Ombasic is the most nebulous character in her own memoir. Her subjectivity is made all the more diffuse by her second-person address to the main character, her father – a youwho never answers back, which, in the silence, might be mistaken for the orphaned daughter talking to herself. mRb