Really Having It All

Motherhood, the Mother of all Sexism

A review of Motherhood, The Mother of all Sexism by Marilyse Hamelin

“How can we stop parenthood from being an exclusively female responsibility so that mothers can thrive professionally?”

This question drives Québécoise journalist Marilyse Hamelin’s Motherhood, The Mother of all Sexism: A Plea for Parental Equality. The slim volume details the strains that motherhood can place on women’s careers, including punitive workloads, burnout, reduced seniority, and the preferential hiring and promotion of men. Hamelin argues that hope lies in a shift toward more involved fatherhood alongside an overhaul of government policies to better support all parents.

The author maintains that the professional stigma of parenthood will change only when fathers begin to share more of the heavy lifting, including its professional setbacks. Specifically, she finds that men need to take more and longer parental leaves after the birth of a child to prevent family life from being disregarded as a “woman’s issue.” 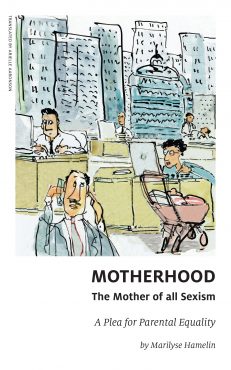 Motherhood, The Mother of all Sexism
A Plea for Parental Equality
Marilyse Hamelin
Translated by Arielle Aaronson

Her case leans heavily on anecdotal evidence, but she wields it like a weapon. Backed by interviews and statistics, these stories point to the structural gaps that allow professional injustices to happen where legal protections are lacking.

Hamelin acknowledges that families in Quebec start from better positions than many – we have paid time off designated for mothers and fathers, plus an additional bank of parental leave that either parent can take. But she insists that we still have far to go, citing a 2018 study showing that childbirth results in a 40 percent income loss for women but has no impact on men’s earnings.

While she notes the extra burdens faced by single mothers, shift workers, and the casually employed, the majority of her account addresses two-parent households where both parents hold salaried nine-to-five weekday jobs. Most of her interviews are with media professionals like herself. This parallels an elision she criticizes in government programs, where working class and single-income households are poorly served. It would have been nice to see these mothers represented better in the anecdotes and interviews she presents – without this counterweight, her advocacy for these underserved women comes off as vaguely paternalistic, if well-intentioned.

Moving past critique, Hamelin proposes a possible a solution, in two parts. First, she argues that men must become more active parents and increase their “solo parenting” – being at home alone with their children for significant stretches of time (think weeks or months, not hours or days) while mothers work.

Then, she recommends four changes to government programs that would help make parenting more egalitarian. First, she argues that the Quebec Parental Insurance Program (QPIP) needs to be adapted to the realities of non-standard schedules and single parents by allowing people to opt for a part-time leave stretched out over a longer period. She also urges greater support for vulnerable workers, especially in service industries, by bolstering funding and workplace supervision to prevent employees from losing shift priority, seniority, or benefits because of parental leaves. Third, she encourages significantly increased leaves in all three categories (maternal, paternal, and parental) for low-income parents. Finally, she promotes longer leaves for fathers, without cutting into the time allotted to new mothers. She acknowledges that these changes would be expensive, but argues, convincingly, that the social benefits to families are worth it.

Motherhood is often a huge sacrifice for women. It’s blatantly unfair, but can seem too boring and unsexy to think much about. Hamelin tackles the problem with a sincere indignation balanced by levity. The work is accessible and clear, and it’s short enough to be readable even by a time- pressed working mother. Ultimately, Motherhood begs the question of when we’ll finally begin to ask ourselves whether men can “have it all,” and balance parenting with a healthy career. mRb