Murder on the Orford Mountain Railway

The time machine effect in Nick Fonda’s new historical crime novel Murder on the Orford Mountain Railway is truly an impressive one. Who can resist the title, with its nod to Christie’s famous Murder on the Orient Express!

Imagine yourself in a small auditorium. The awkward, technologically challenged archivist-cum-narrator and presenter (this one is from the Richmond County’s Historical Society in the Eastern Townships) introduces the story by laying out the facts surrounding a murder. With just enough fumbling, this narrator adroitly leads the reader to two articles from August 14 and 17, 1905, in the Sherbrooke Daily Record – a newspaper for which, by the way, Fonda himself writes today (the paper is now known as The Record). The premise for the whole novel is laid out here.

The first article recounts the murder of a young boy, Ralph Andosca, in a construction camp, near Windsor Mills, in the Eastern Townships. The workers in this camp are building Judge Samuel Foster’s strategic Orford Mountain Railway, which plans to connect up with the Canadian Pacific Railway in Eastman and, in another phase, to the Grand Trunk Railway, at Windsor Mills. The hand-drawn map provided at the front of Fonda’s novel comes in quite handy for those of us not entirely familiar with all the villages and towns in the area. And just like in a time warp, the present dissolves quasi-cinematically into the beginning of the twentieth century. 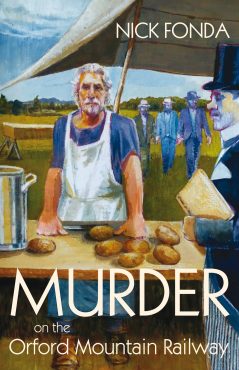 The question of what is historically accurate and what is fiction starts to form at the back of one’s mind here. But it doesn’t remain there long. The reader gets swept into the story, as the modern-day narrator fades progressively into the background. The novel’s various protagonists take his place and relay the threads of their involvement in the story, giving us a ton of clues as to how everyone fits into the account of young Andosca’s murder.

The details are so precise, so well turned, that one cannot help but imagine it’s all real. And a lot of it is. Fonda wrote about it in his earlier non-fiction work Richmond Now and Then. So along with a great fictionalized murder mystery, the reader is privy to a fantastic history lesson about the railway system in our very own Eastern Townships. The main characters quickly take on a larger-than-life presence in a space where fiction and history meld into a fantastic murder mystery from the turn of the last century.

In writing the main story, Fonda weaves into the narrative long, dense flashbacks that help the reader understand each character’s ambitions. Construction foreman Cyril Ashenden; Italian immigrant Frank Andosca, the murdered boy’s father and the cook in the camp; as well as railroad baron Judge Samuel Foster: they all benefit from long passages that foreshadow the events that come to pass. Could the immigrant status of the Andosca family and ensuing racist tensions have contributed to the event, or is it something else? The chapter-long flashback of Frank Andosca’s life gives the reader an idea of the patriarch’s treacherous younger years. We also learn that Ashenden isn’t quite who we think he is. And what of this business the illustrious Foster family is involved in? The enigma remains whole.

And suddenly, prompting us back into the present, our archivist reappears and presents us with excerpts of a certain Colleen O’Connell’s diary. Whereas all the previous narrative threads developed in Fonda’s novel were connected to the original story, this one seems to come out of nowhere. But in a postmodernist, historiographic, metafictional twist, passages of the young lady’s flowery personal prose help to finally tie together much more than Ralph Andosca’s murder.

One thing that remains a mystery, though, is the name of this archivist who has so adeptly chronicled, and seemingly solved, a 115-year-old murder mystery – or have they? It’s all part of the intrigue of this wonderfully written, double-layered, history/mystery time loop of a crime novel.mRb