A review of Music, Late and Soon by Robyn Sarah

“Iwas late for my piano lesson. Thirty-five years late, to be exact.” Robyn Sarah’s memoir, Music, Late and Soon, hooks the reader immediately with this tantalizing opening, then takes us on a personal journey as gripping as it is profound.

As a young girl, Sarah had taken piano lessons with an enigmatic teacher, Phil Cohen, who forsook traditional notions of scales and grades for a sort of holistic, highly physical yet somehow spiritual, and seemingly self-designed piano philosophy. She eventually switched to the clarinet, but abandoned her music career as a young adult to become a writer (and ultimately a Governor General’s Award–winning poet). 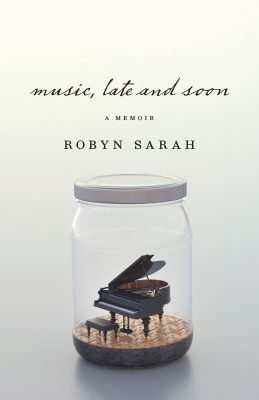 Much later in life, in her sixties, Sarah has the notion of returning to the piano, getting herself trained into performing shape, and writing a book about the experience. She finds out that Cohen is still alive, in his eighties, and, improbably, still teaching. The story jumps back and forth from her childhood lessons, her reunion with her mentor, and her life experiences in between, all the while digging deeper into the book’s central themes of what music means to Sarah, and her paradoxical compulsions to abandon it and take it up again.

Sarah writes masterfully, though she seems to follow Cohen’s dictum to ignore traditional frameworks in favour of feeling. She can spend pages analyzing a fleeting thought, but at one point she offhandedly mentions dating a young man, then marrying his twin brother, in a single sentence. The book’s structure is a bit of a puzzle, “circular” by Sarah’s own definition in tribute to a musical composition’s recurring themes. You give her the benefit of the doubt on the veracity of her pages-long conversations recalled from childhood. One of Cohen’s central lessons is for her to “get out of her own way” as a pianist, and she mostly does this as a writer – although she is capable of a flourish, as in a magnificently gross-out passage in which she rhapsodizes about the smell of her high school band’s rehearsal room after the band members’ lunches are “metamorphized” through their instruments into the pungent air.

Although Music, Late and Soon is a memoir, Phil Cohen is the central subject in many ways. Deeply private, inscrutable, and full of cryptic utterances that Sarah takes years or decades to decode (at one point, she nicknames him Phil Koan), he takes on a guru-like role in her life and, like any paternal figure, becomes the object of both affection and frustration as she pushes back against his rules (or rather, in this case, his total disdain for rules and received wisdom). Late in the book, when she attends (to Cohen’s disapproval) a sort of piano summer camp with musicians decades younger than her, the experience leads her to some insight about the insecurities and anxieties that prevented her from taking on a music career.

As someone who studied music seriously throughout childhood, then abruptly abandoned it as a teenager, I found that Sarah’s self-questioning about her life choices hit home and hit hard. Her book is a gift to anyone who has left behind a pursuit and second-guessed that decision, though few of us could hope to have a teacher as inspirational as Cohen to coax us back into following our early passions. Describing their reunion, she writes: “Momentarily, I’m flooded with that remembered sense of being in touch with something age-old, precious, mysterious, and profound, of being inducted into something secret and sacred.” It’s this profundity, the deep meaning of music, that Sarah captures so well in her beautiful and uplifting story.mRb