My Mother, My Translator

A review of My Mother, My Translator by Jaspreet Singh

Jaspreet Singh’s new memoir, My Mother, My Translator, is a book full of silences. Through a series of vignettes, the author recounts the story of his family, whose lives were altered irrevocably by the British Empire’s 1947 partition of India, and, later, deadly anti-Sikh pogroms in the country in 1984. Although the book leaves much unsaid about the scale of this destruction, Singh conveys the damage elliptically, employing a winding progression of scenes to demonstrate the lasting, intergenerational effects of trauma. The memoir’s many passage breaks, its jumps between prose and verse, its rapid transitions through time and place – all of these narrative elements serve to highlight the sharp divide between what can and can’t be said, what lives inside the silences we inherit from previous generations.

Yet, as Singh notes, the book is also an attempt to fill a larger silence – the memoir that his mother, a writer and translator, started but never finished. At the time of her death, Singh had been carrying around pages of her manuscript to translate from Punjabi to English. His own memoir is forced to exist, as Singh says of his mother at one point, “in the subjunctive mood.” If that book were to exist, if his mother were to have succeeded in putting her experiences onto the page, what would we be left with? Even then, Singh doesn’t dare attempt such a task literally, feeling the weight of her silences on his own words. “I found out, in my own way, that telling the story in first person liberated me somewhat,” he writes. “This way, it was also possible to imagine things my mother had not revealed.” 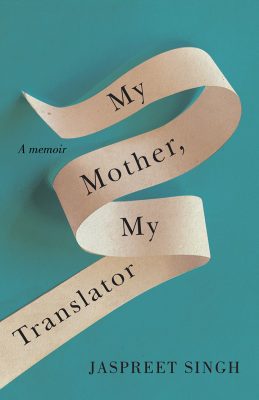 My Mother, My Translator
Jaspreet Singh

Singh’s imagining himself into the lives of others extends to the rest of his family, including his father and grandparents, making My Mother, My Translator not so much a rendering of any particular relationship as it is an attempt to represent the history and trajectory of family trauma in the form of a memoir – while along the way questioning the genre’s ability to actually accomplish that task. To translate experiences to words, he writes at one point, would be to artificially fix memories that are continually alive and evolving. One of Singh’s solutions to this problem is to discuss his thoughts about the scenes that might be missing in his mosaic, in a way that says as much about himself as it does about those he is describing. Another is to take the reader far into his own experiences, trusting that the connection to the book’s broader project will be clear. On this point, he occasionally goes too far, with lengthy asides on chemical engineering and climate change, to list a couple of examples, at times subtracting from the book’s emotional effect.

Then again, in Singh’s telling, the only way to confront the atrocities of the past is precisely with these wanderings through memory – an effort that often comes up short. “Trauma constantly keeps retelling because it can never tell the story exactly,” he writes. “Trauma resists translation.” Even as he employs narrative to clear the fog between the past and himself, he is constantly reminding the reader not to get too cozy with the version we are given, to remain hyper-aware of what we might be missing. In this way, at least, we can begin to inhabit the experiences described in the book, though we are warned that the text we are reading can never be faithful to the original.mRb

Jon Victor is a writer who lives in Montreal.