The Forest for the Trees

A review of Nature, Place, and Story by Claire Elizabeth Campbell

It is estimated that four million Canadians ordered their free Parks Canada passes for 2017, translating into over fourteen million visits by the end of July. Depending on the park, the spike in attendance sometimes topped fifty percent. It can safely be said that Canadians love a walk in the park.

But behind the lofty reasons for establishing a national park – preservation of the environment, educational opportunities – are the coarse politically and economically motivated attempts at creating “a coherent national story,” some of them as cringe-worthy as they are fascinating. It is this forging of a national story that Claire Elizabeth Campbell, associate professor of history at Bucknell University, deciphers in Nature, Place, and Story.

Narrowing her scope to a geographic and thematic cross-section of parks, Campbell chooses to focus on just five sites. With each location, she reveals how not only the site but also our history was constructed into something familiar, tame, and simplified. 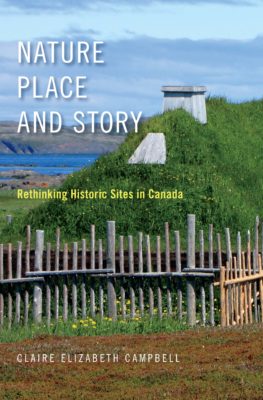 She begins with L’Anse aux Meadows, where the transformation of vague mounds of earth in northern Newfoundland into a UNESCO World Heritage Site is a study in, if nothing else, magical thinking. Although archeological excavations in the 1960s and ’70s failed to turn up anything definitive, it was its very nothingness that caught the imagination.

Early commercials and even a Heritage Minute are more about “what they left behind” than what is actually there. The visitor to this “rebranded peninsula” is encouraged to trace invisible footsteps, gaze out over the sea and imagine the massive Viking ships, and, yes, interact with “costumed interpreters.”

A winning combination for Parks Canada and Newfoundland and Labrador Tourism, its veracity is almost beside the point. What is the point, according to Campbell, is our unwillingness to see the colonization and industrialization of our lands as a continuum. Ironically, the depletion of the fishery, nearby hydro stations and lines, and fracking all threaten the pristine nature of the Newfoundland peninsula. Campbell wonders if Parks Canada would ever “discuss ecological and commemorative integrity in a holistic way, and more importantly, show us how current environmental issues are rooted in past actions.”

The predilection to reduce history to interpretive panels and reconstructed buildings keeps us from acknowledging “that our choices have consequences and costs.” We need to ask questions not only about history, but about how we recreate it. We can do better, she says.

Campbell then moves westward, scrutinizing parks along the way: Grand Pré (preserved as a seventeenth-century artifact rather than an example of “the continuity of the industrial past”), Fort William (the new construction and site standing in as a placeholder for the “expectations of the environment in Canadian history”), the Forks of Red River (essentially a “massive project of urban reclamation”), and the Bar U Ranch (“preserving an older view of the frontier”).

Beyond the crassness of landscape for profit, Campbell wonders how L’Anse aux Meadows and the other sites fail to “offer diagnostic insight into the origins, extent, and longevity” of a range of environmental and social challenges we are still faced with today. After all, the Norse established “a pattern of colonization and extraction that would be repeated again and again by Europeans and then Canadians – and which would be normalized and heroized in Canadian history just as it had been in the sagas.” Likewise, the “quite unbearably beautiful” Bar U Ranch posits a romantic era of herds of buffalo and First Nations tribes but fails to explore our genocide of both.

By perpetuating these parks as quaint snapshots of nation building, Parks Canada does a disservice to not only the past, but to future attempts at nation being. If you’ve ever been to a national park – and especially, if you have that Parks Canada tag hanging from your car rear-view mirror – pick up this book and read it while you drink your latte in the gift shop. mRb