A review of Neglected No More by André Picard

Montrealers got an early glimpse of the ravages of the COVID-19 pandemic when the horrifying details about the outbreak at Dorval’s Résidence Herron long-term care home were released. But long-time Globe and Mail health reporter André Picard knew there was a serious problem with elder care in Canada long before the pandemic. He’d been documenting the issue for years, and with the COVID headlines bringing it to public consciousness, the timing was tragically perfect for Neglected No More. Picard’s mix of exposé and impassioned plea is summed up in the book’s subtitle, The Urgent Need to Improve the Lives of Canada’s Elders in the Wake of a Pandemic.

Picard begins with some history, much of it brutal. As he notes, “our institutional eldercare has its roots in the penal system, not the health system.” In the Victorian era when seniors’ homes were first built, they were sometimes known as “homes for the friendless,” and residents were forced to work and wear uniforms like prisoners. 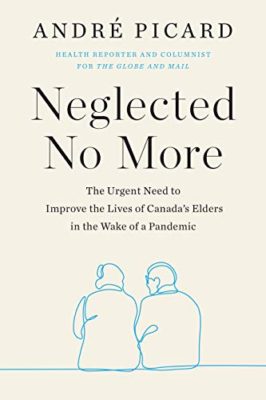 Over time, the system became nominally more focused on care, but some problems were baked in from the start. “Unlike medical care, long-term care is neither universally accessible nor affordable to all, a reality that undermines the philosophy of medicare,” Picard argues. The result of long-term care being exempt from our universal health care system is a patchwork of programs rife with confusing bureaucratic rules which leave elders helpless, frustrate their families, and discourage their caregivers. All in all, despite our widespread lip service to the “greatest generation,” Picard notes darkly that we live in “a culture where, at a certain age, you cease to have value to society,” an attitude he calls “demographic nihilism.”

Neglected No More is not an easy read. At one point, Picard cites some related statistics compiled by Nora Loreto which he calls “mind-numbingly depressing,” and the same could be said for much of the data he provides. To name a few examples: over 5,500 CHSLD workers in Montreal tested positive for COVID; frontline care workers in Quebec and Ontario were given $4 wage increases during the pandemic, but the raises were later rescinded when it was determined the crisis had passed; of $300 billion in COVID relief offered by the federal government, exactly zero was for long-term care. And on it goes.

The government can hardly plead ignorance on the systemic problems in elder care, having commissioned no fewer than 150 reports on the situation over the years. But, says Picard: “More shocking than the sheer number of reports is their remarkable consistency. The same failings are underlined time and time again.”

Picard concludes by listing how elder care is handled in several other developed countries – some of which have better systems than ours, some almost inarguably worse – and then offers his own set of steps that the Canadian system must take in order to improve the situation. He also touches briefly on assisted dying – too briefly, in my opinion, as it’s an essential related matter, but perhaps too far off-topic for Picard’s succinct focus (not to mention an ethical can of worms).

One thing he makes clear is that the system can’t continue as is. The baby boom generation is beginning to reach the point of needing long-term care (a cynic might posit that the boomers, accustomed to getting what they want, will demand better treatment, and unlike their successors will actually be able to afford it), and as Picard notes: “By 2050, it is projected that there will be twice as many seniors as children and youth.” So everyone who may have elders to care for, and/or may end up as an elder in need of care themselves – which is to say, everyone – should read this book, and press our governments to heed Picard’s warnings and wise advice. mRb