The Democracy of Urbanism

A review of Neighbourhood by Avi Friedman

Neighbourhood: Designing a Liveable Community, the latest book by Avi Friedman, begins with a two-part question for the reader: think about a neighbourhood you like, then about why this is so. Friedman, a professor at McGill University, a practising architect, and the author of eighteen books about home design, urban planning, and sustainable housing, has spent years considering these questions. In this short volume, he offers the reader some answers of his own.

The context that gave rise to the book was the invitation, from a small city in southern Ontario, for Friedman to plan a new development. Middlesex Centre is within a short drive from London and is a mix of agricultural lands and new suburban developments. The Mayor and the Chief Administration Officer of the municipality have a progressive vision for their community and hope that Friedman will give it shape.

The project of designing this new community drives the narrative of the book. Friedman names his concept “Wellness,” after the city’s brand-new solar-panel-roofed recreation and community centre, around which the neighbourhood will be built. The narrative begins with a survey of the history of the area, starting with European settlement in 1790 (apart from a brief retelling of a purported Indigenous “legend” tracing the name of the area, Indigenous history and any current claim or presence in the area is notably absent). History (partial as it is) is important to Friedman; he’s looking for the “nature of the place.” He is committed to designs that preserve and build on a place’s heritage. 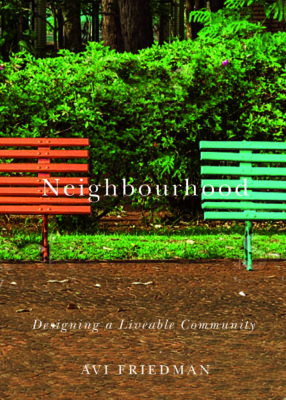 This commitment informs his decision to use the original grid design laid out by the surveyor in 1790 as his initial planning tool. What’s interesting is how he gets there: beginning with a short story about visiting the ruins of the Hellenistic city of Kameiros on the Greek island of Rhodes. Kameiros was built on a hill, an octagon divided into three zones: a place for worship, a dense area of homes, and a public gathering place – the agora. Friedman then provides a summary of the history of urban planning, drawing on the work of architectural historian Spiro Kostof. Kameiros fits within the grid tradition traced to ancient Egypt and China. Other cities have been built as utopian projects (the Diagram City) or to “convey the visual effect of grandeur and coherence” (the Grand Manner type).

The short chapters, which take the reader through his thinking process step by step, offer further anecdotes of cities and towns Friedman has visited to illustrate particular design concepts or issues. Full-colour photos and architectural diagrams are scattered throughout. He discusses the planning of spaces to discourage car use and support public transit, how to design a home to support the ageing-in-place of its residents, and ideas to make use of space between buildings to encourage resident interaction and physical activity and play by children.

Friedman is an expert in sustainable design and it shows. It’s easy for one to imagine how to make a place more environmentally friendly through the addition of green energy options like solar panels, or renewable or recycled construction materials. But the author digs deeper. An entire chapter is devoted to the importance of where to situate a building so that it takes advantage of the contours of the surrounding environment, the arc of the sun throughout the changing seasons, and wind patterns. Wind and sun can heat and cool a house; the key is for this to occur during the appropriate periods of the year. Window size and placement can affect the passive solar gain inside the house; according to Friedman, designing a building with this in mind can reduce energy consumption by up to forty per cent.

The book ends with Friedman presenting his work to the people of Middlesex at a public meeting. As the crowd discusses his concept, he reflects on the importance and value of democracy, that citizens are “encouraged to show support for, or voice objection to, how their place would be developed.” This raises a question only briefly alluded to in the book: the political implications of development. New developments like Wellness often face opposition from neighbouring homeowners, who are concerned about increased traffic or harbour discriminatory attitudes about the “type” of people who might live in smaller apartments. Property developers, too, might be unwilling to build such a place if the design innovations, however “green” they may be, reduce their profits. And not all opposition to new plans are inspired by not-in-my-backyard reactions. For instance, noticeably absent from Friedman’s design is any commitment to social housing, much needed in every community.

Neighbourhood leaves aside the question of how residents can be meaningfully involved in the planning of new neighbourhoods or the redevelopment of existing spaces, and the problems of unequal influence over development between tenants, homeowners, and property developers. This isn’t a reason to avoid the book, which is an accessible and engaging inside look at a design process driven by a progressive planner. Neighbourhood offers down-to-earth suggestions on ways to make new developments more sustainable. Those interested in “liveable” neighbourhoods will find a wealth of good ideas in Friedman’s slim book, even if they will have to look elsewhere for a guidebook when they move from idea to implementation. mRb