A review of Never Forget by Martin Michaud

Ready to lose yourself in a noirish detective novel? If so, Never Forget is your next read. The third installment in Martin Michaud’s Victor Lessard series is an immersive thriller full of darkness, loathing, and vengeance. The bad guys are vicious, the victims deserving, and the detectives sorting out who’s who are battling their own inner demons.

The book opens with three events occurring in rapid succession. A prominent psychiatry researcher is abducted, tortured, and killed. A high-powered partner at a law firm receives a coded message that spurs him to grab some archived files and go into hiding. And a homeless man, haunted by delusions, memories, or both, throws himself from the roof of a tall building after producing both of these other people’s wallets from his pocket. How these events fit together is the puzzle presented to Detective Victor Lessard, middle-aged, divorced, and hanging on to sobriety for dear life.

The novel is 545 pages long and has so many storylines and characters that if you fail to give it your full attention, you’ll be lost. The characters – in particular the members of the police force – are fantastically vivid, and Detective Victor Lessard is the anchor. His compulsion to work the case even when it strains his personal relationships creates conflict that accelerates the novel’s momentum. It is also a pleasure to read about his mercurial partner, Jacinthe Taillon, who is always either ribbing him or shoving food into her mouth à la Brad Pitt in Ocean’s Eleven. 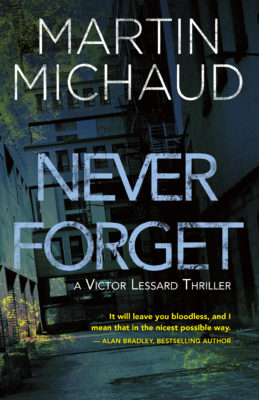 There are patchy bits; the sex scenes are perfunctory, and the tender moments between Lessard and his girlfriend are clunky with clichés, but one doesn’t pick up a detective novel for the romance. The fast pacing of the story is great, and the action scenes (especially the fight scenes and a high-speed car chase through downtown Montreal) are riveting. Plot twists detonate when we least expect them, showing us flashes of betrayal or depravity, and one reveal in particular is immensely satisfying.

The book has one clear theme: ghosts of the past. The author tries hard to make identity a second theme, but the fit is off. Peppered throughout the book are one-page scenes from pivotal moments in Quebec’s history (starting on the very first page, set the night of the 1980 referendum). Michaud tries to link these moments of provincial identity crisis with the killer’s own search for a sense of self, but this ultimately falls short. The killer, apart from being a killer, is a surprisingly poorly developed character.

Never Forget was originally published in 2014 in French, and it shows. We are led to believe that the novel is unfolding in the present, but 2020 is not the year of BlackBerrys or digital cameras or printed airline tickets or even taxi cabs. And the word choices and phrasing, while not technically incorrect, often feel stilted, the way direct translation can. (We learn that a car “expired” when in fact the engine died, and that a researcher’s publications had “made a mark on the discipline” instead of the field.)

Never Forget is set in Montreal with French-Canadian characters. But, curiously, the novel has no French dialogue. This may be an attempt to broaden its appeal to English-language readers, but something important is lost along the way. The original French title, Je me souviens, is the official motto of Quebec and is loaded with meaning – part battle cry, part lament, part threat, part steely resolution. The phrase echoes throughout the novel, but, translated, it has none of its power. When a pivotal character whispers “I remember” on his deathbed, it has no larger meaning. Like Schadenfreude or déjà vu, some words are beyond translation. mRb