Juliana Léveillé-Trudel’s recently translated novel Nirliit opens with a trip North to Salluit, a “postcard paradise” that is just past Puvirnituq, the “Most Violent Community in Nunavik.” Nirliit means snow geese in Inuktitut, and the narrator identifies with these birds, for she too travels north in the summer and south in the winter. In the opening, the narrator returns to learn that her friend Eva has disappeared. From its first pages, Nirliit resuscitates, albeit somewhat knowingly, the tropes of colonial literature: The disappearing Indian. The fucked up, drunken Indian. The stoic one. The gone.

The first-person narrator situates herself among the “new white missionaries [who] preach healthy living. Don’t smoke, don’t drink, don’t take drugs […] don’t skip school or work.” Non-Inuit – Qallunaat – are no saints, though: they go North not just to “help” but for adventure, sex, money, to get away. Seen this way, as an excoriating depiction of settler-Indigenous dramas in a brutal but beautiful landscape, one might think that Nirliit offers balance. But “objectivity” is its own fiction, since it erases the act of looking, the fact that a thinking person decided to see this brutality rather than something else. Reviewers in French called this the voice of a powerless witness, but Léveillé-Trudel has plenty of power. 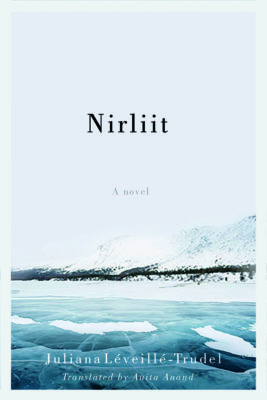 Published to glowing reviews in 2015, which led to a play, this translation by Anita Anand, and a film on the way, Nirliit exemplifies what academics call “damage-centered research” or, more simply, the white fetishization of Indigenous pain. Though occasionally self-reflective, the use of a second-person address keeps the focus on Salluit and its residents. Most often, the narrator addresses her missing friend, Eva, and later, Eva’s son Elijah. Sometimes the “you” shifts, such as when she writes “you Inuit,” and says, “How you would make Shakespeare drool with your horrible pain and despair!” She writes, “And you die. You never stop dying. […] stupid accidents [… ] merciless tundra […] diseases that we don’t have anymore, like tuberculosis, but which still attack you because of your mid-nineteenth century sanitary conditions.”

While the narrator voices the familiar tropes, the narrative trots them out in interlocking vignettes. We see Maata, pregnant at sixteen by one father or another, Alaku waiting for her “white prince,” Aanatuq who, at ten, confides he used to smoke pot, and a crew of Quebecois construction workers who might as well becoureurs des bois. Everyone dreams of escaping Salluit and one actually does: Tayara imagines himself a celebrity until he lands in Montreal, drinks himself to oblivion, gets pummeled in a fight, and is sent home, a busted and burnt-out star. The novel closes with the birth of Maata’s baby, named Eva after the one who disappeared. The stage is set for new tragedy.

To account for the moral failings of Inuit, the narrator repeats Félix Leclerc’s tidy explanation: “The best way to kill a man is to pay him to do nothing.” This attitude replicates a view of Indigenous peoples as dependents rather than nations, and payments as “handouts” rather than what they really are: treaty obligations or reparations for stolen land, lives, culture, and children. Though Nirliit tempers tragic descriptions of Inuit life with occasional references to settler colonialism – the forced relocation of Inuit in 1953, the massive slaughter of sled dogs that same decade, the racist attitudes captured by phrases like “You Inuit” – it is handily relegated to the past and given no real explanatory power.

Yet, the biggest problem with Nirliit goes beyond its pages and into the society that would herald its “powerful beauty.” Nirliit follows in the path of Dominic Gagnon’s controversial film Of the North. Praised to the hilt in French and lambasted in English – and Inuktitut – as a colonial, racist nightmare, Of the North was and is couched in a Janus-faced critical discourse. In English, Gagnon says the film is about the colonial gaze, and in French, it is a film about drunken, destructive Inuit. Nirliit does much the same, writing a portrait of a damaged people with only occasional recognition that systemic forces are at play: dog-whistle leftism that satisfies contemporary society’s desire for stories of the disappearing Indian.

At issue isn’t whether or not this book is a realistic portrayal of a dark side of Inuit life; it may be that life in Salluit is as rough as described, but there are other stories that could be told. Léveillé-Trudel is a strong writer – poetic and fierce. If she must write about Inuit, why not tell the truth of Inuit resilience, art, and ingenuity? A rhetorical question: why would someone with intimate knowledge of a place want to write the one story everyone has heard for years, the one story we already “know”? Who does this “cry for the North” serve, but Léveillé-Trudel herself and a society that would prefer to believe that individual weakness alone accounts for tragedy in the North? Léveillé-Trudel perpetuates a colonial gaze in this book, but the shame goes further, to the society that lauds it. That shame is ours. mRb