No Culture, No Future

No Culture, No Future 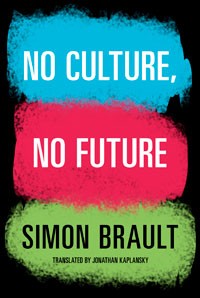 No Culture, No Future
Simon Brault

Simon Brault is CEO of the National Theatre School and Vice-Chair of the Canada Council for the Arts. He has been a driving force behind a range of large-scale initiatives to increase participation in arts and culture. He describes himself as a “cultural development activist.”

Elise Moser: Your book is a gentle but relentless polemic in favour of the democratization of culture. You mention that only about 30% of people in countries like Canada are reached by cultural and artistic works. That’s a shocking statistic.

Simon Brault: The goal of democratizing culture – the original, authentic, deeply rooted cultural expression created by artists – is difficult to attain. Most cultural policies are on the supply side. We support creation, production, dissemination, but the other side of the equation, cultural participation, is underfunded or ignored. Beyond the 30% of educated people, or people who had contact with the arts when they were young, it’s difficult to reach people.

EM: You speak about elitism creating a gap between “the cultural community” and “the general population.” Should artists worry about the accessibility of their work? Can public policy counteract this?

SB: There is a danger in any democracy that people will say, “if it’s only good for the elite, why should the taxpayers pay for it?” We need to prevent that by developing the national conversation about cultural participation. If it’s not done, it means not only that the excellent work produced by our artists won’t be seen by a large group of people, but also that the values that are carried by that culture won’t be shared by the majority of the population.

Studies show that we should try to reach human beings when they are young; it’s easier. But it’s possible to do it with adults. There’s a lot of leisure time now in our society, but a lot of it is passive. When we created les Journées de la culture it was to give people a sense of the creative process. There are hundreds of thousands of Canadians involved in choirs. It gives them something much more powerful than just attending a concert. This notion of active participation, active engagement with art, is needed, but nobody argues for that. We have lobbies for artists, for funders, but we’re not organized to promote the cultural rights of the population.

Every citizen has a need for self-expression, but we built the cultural system as if the most important clients are the people receiving the grants. We talk about our specific audience instead of the general public. It’s like we accept that we’ll always be marginalised, instead of trying to become more central in the human experience.

EM: How can we increase the perceived value of the arts and of cultural producers in our society?

SB: In Canada, when we talk about the arts in public, we always talk about two things. We talk about a specific cultural product, and we talk about money. It’s as if, talking about food, we just talked about what’s in the grocery, the price, and not why it’s important to have healthy food. But with the arts we ignore those arguments. We are so concentrated on trying to survive that we forget to have the discussion about the values of engaging with the arts. We are 600,000 people working in the cultural system in this country. If only 10% of these people decided that, okay, we’ll talk about these things, maybe we could change the dynamic. That’s why this book is almost a manifesto. We need to talk about what really connects us as individuals, as artists, with the arts.

EM: How would you like to see artists and cultural producers organize themselves to have more political and social impact?

SB: Artists and cultural producers are over-organized in a sense. We are organized to deal with a system that is supply-oriented. But we are essentially organizing the conversation between us and the decision-makers, which is very few people in this society. The conversation we have as a sector with the general public is very poor. It’s transactional. It’s, you know, please buy our tickets. It’s not about what we do.

EM: You make a case that there is a special role for culture in the life of cities in this globalized world. What is that role?

SB: Cities are where the transformations of our civilization are happening at the fastest pace. Arts and culture, for me, are one of the most powerful ways to address the questions of living together. At the city level, you can have a say as a citizen.

I’ve been travelling with the book, across Canada and other cities in the world, and the discussion on culture – in the media, in civic society – is very much a discussion about how we organize our city. Cultural policies, historically, have been crafted by nation-states. But now we are reinventing all that from the bottom to the top.

EM: You cite a study led by Richard Florida in 2004 that showed that Montreal has exceptional creative potential. Our bilingual culture, population density, a concentrated creative sector, and the vitality of our artistic underground were all factors. How do we capitalize on all those good things to make the leap to become a world-class cultural metropolis?

The other challenge is to align your cultural choices, like investments and spending, with what is specific to the city. Because a creative metropolis is all about authenticity.

Anyone who wants to advocate for the arts, the first thing to do is to reconnect with their personal passion. Because once we can express it, we can enter into conversation with any other human being. Anyone you meet has a personal connection to arts and culture. Most of the time it’s profoundly hidden, but once you connect with that, it’s powerful. Anyone can say “oh, culture is not important,” but if you really have the discussion, you’ll realize that it is in fact important for anyone. The minute you can come into that conversation, you’ve achieved so much.

EM: You state that “the time is . . . ripe to bring back to the forefront principles of cultural policy that have been abandoned.” What are those principles, and why is this the moment to reclaim them?

SB: At the end of the fifties, the Canada Council, the National Theatre School, the National Film Board, all these great cultural institutions – they had visions that were very much influenced by what happened after World War II. It was about building a cultural infrastructure, giving access. They were trying to answer profound needs – the need for beauty, for reflecting about the world. Now when you hear speeches from the people who are running these institutions, it’s all about the contribution to the economy. We replaced discourses that were grounded in humanism by speeches that could be written by economists. We need to go back to those notions, because as a civilization we are facing challenges that are more or less the challenges this world was facing after the last world war. It’s urgent.

mRb
Elise Moser is a writer and editor who coordinates the Atwater Writers Exhibition and co-organizes the Holiday Pop-up Book Fair. She has published three books and is working on the next one.