Roughing It In The Bush

On the Crow and Other Stories

A review of On the Crow and Other Stories by Robert A. Poirier

The romance and realities of life in the bush are hard to find in contemporary fiction, with the exception of the occasional Joseph Boyden book. For those who enjoy depictions of that life, complete with sled dogs, snow, and a smattering of Algonquin vocabulary, Robert Poirier’s collection, On the Crow and Other Stories, might afford a pleasurable read.

Some of Poirier’s characters live in a time before modern conveniences; others have the advantages of snowmobiles, tea bags, and lemon meringue pie. The six pieces range fairly widely, although all of them are tied to a world most of us know only from history books. Poirier lives near Maniwaki, Quebec, a couple of hours north of Gatineau, and it is clearly a part of the world that nourishes his imagination, if it is not exactly the terrain of his fictional explorations. 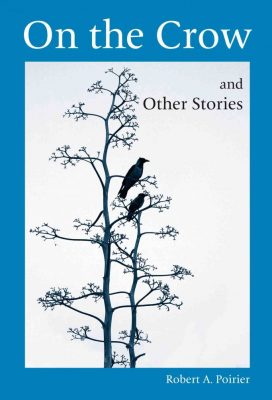 On the Crow and Other Stories
Robert A. Poirier

His stories show us men at home in the bush, but not always comfortable with other men, or with women. His descriptions of how to pack a dogsled or make camp (with balsam branches as bedding and birch bark to start a fire) are detailed – too detailed; the reader is detained by static description and repetition. In “After the Portage,” a long expository passage is followed by a jarring shift in tone and time, and then by a brief series of events. In the process, the poignancy of a relationship breakdown is lost because we never quite get inside either character’s emotions. Most of the stories suffer from long, meandering set-ups that leave little time for action to occur; they would have been better off much shorter and more active.

On the Crow’s stories often seem to be good ideas that lack development. “Oshkinawe Sled Dog Race,” for example, could have been a moving portrait of a man making his life a connection between peoples and generations. But the ending is not set up; it feels incidental, rather than inevitable. It should have been more powerful than it is.

“The Enforcer,” which is very different from the other stories, tells of a hard-bitten alcoholic whose willingness to look a violent ex-con in the eye is rewarded. This story is well constructed, although once again the ending feels weaker than it should have been. The title story begins with another long expository passage, and we spend very little time getting to know the people involved. The climactic event takes place offstage, so we miss the excitement and the tragedy, and then we are left with our sad characters – but we are hardly affected because they are strangers to us.

Overall, the strength of the collection – the sympathetic portrait of a place that is part of both our past and our present – does not balance the weaknesses of the writing. The characters are not well developed; action is sacrificed to description, robbing the tales of momentum; plots are not well set up, so even the best of the stories lacks impact. It is unfortunate that the stories were not further revised, because there is clearly a sympathetic intelligence at work in the portrait of the land. More rigorous editing would have been useful, and perhaps would have helped these stories find those readers for whom roughing it in the bush – or reading about it – is a pleasure.