A review of Our Little Secret by Emily Carrington

At first glance, the childhood and early adolescence recounted in Emily Carrington’s stunning debut memoir might appear idyllic—at least in the warmer months: cycling through the Prince Edward Island countryside, caring for her pet horse and sheep, indulging her love of drawing, doing well in school.

Shift the perspective slightly and move ahead in time, though, and the young Carrington’s situation reads like a case study in vulnerability. When her parents break up, she chooses impulsively to stay with her father, a downwardly mobile former high school principal whose “eccentric” behaviour would now, forty-some years later, almost certainly be recognized as an indicator of bipolarity. This is a man who accuses his daughter of being spoiled because she has objected to living in an unheated shack in the middle of a Maritime winter. The domestic situation takes a bad turn quickly. 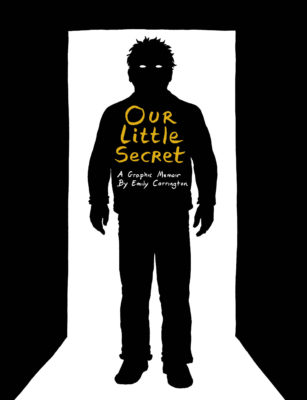 Into this scene steps one Richard, 40, a local carpenter who is not so much a “family friend” as someone who, in this isolated community, just happens to be around. His presence bodes ill from the start: recognizing Emily’s rudderless state, he embarks on a methodical campaign of sexual grooming against which the girl, not surprisingly, proves ultimately defenceless, and her world shatters.

Our Little Secret is a remarkably assured work; it’s easy to forget that it’s a debut. Carrington’s drawing style, with the lines doing all the work, is reminiscent of Joe Sacco’s, and she has a sure hand at integrating image and text, maintaining a compelling narrative drive throughout. She proves herself especially adept at capturing the elusive essence of certain inflection points in life—boundaries you don’t realize have been crossed until it’s too late to turn back, ruefully recognized only with hindsight.

Along the way, we’re reminded of societal norms scarcely credible from a present-day perspective, like the jaw-dropping fact that, at the time of which Carrington writes, the legal age of consent in Canada varied according to province: what was a crime in, say, Quebec, wasn’t a crime in Prince Edward Island. Early-1980s popular culture appears aligned against her, too. A world that countenances grim cultural objects like Motörhead’s “Jailbait” had little trouble looking the other way when a middle-aged man took advantage of a fifteen-year-old girl.

As the book proceeds past its halfway point, it becomes clear that what has been a memoir of trauma is also a meditation on the nature of justice—the need for it, the pursuit of it, and the limits of its reach. For Carrington, it should not have been anywhere near so hard to achieve some form of closure, but the system fails her again and again, with endless legal delays, incompetent representation, ineffectual (and expensive) counselling, and general patriarchal arrogance.

In the end, it was only by rechannelling her childhood artistic vocation that Carrington was able to achieve self-empowerment. The reader is never in the slightest doubt as to the courage it must have required to embark on Our Little Secret, and to carry it through. At one point, as Richard’s predation nears its awful peak, Carrington writes “I am not going to draw what Richard did to me next… It was degrading,” and you shudder, because what she has drawn elsewhere is gut-wrenching as it is.

The book is prefaced by a warning, cautioning that “scenes including childhood sexual abuse […] may be triggering for some readers.” The words are salutary, but nevertheless it is to be hoped that Carrington’s book will find as wide an audience as possible. As she writes, “Sometimes I wonder to myself: what would have helped me back then? What might have made things easier?” One answer, surely, is a book like this one. Our Little Secret is not an easy read, but it is an essential one.mRb