A review of Pain and Prejudice by Karen Messing

When Karen Messing was five, her father, an executive, took her to work one day. She sat out on the factory floor and watched women soldering coloured wires into radios. After a while, she went into his office and asked him if the women didn’t get bored doing this tedious, repetitive work all day. “No, they don’t,” he told her. “They’re not smart like you.”

Messing was indeed a very smart little girl. She was also independent of mind, and doubted her dad’s glib response. Her intelligence, empathy, and sceptical cast of mind would serve her well when she grew up to become a critical-thinking feminist scientist with a lively (and ever-evolving) class consciousness. 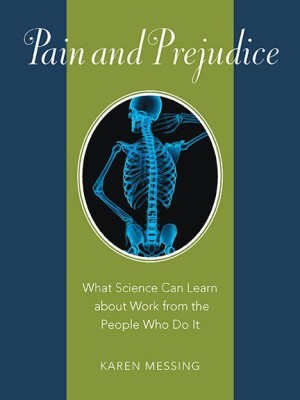 Pain and Prejudice: What Science Can Learn about Work from the People Who Do It is a rare account of one woman’s scientific career. Messing has an easy style – personal and personable, earnest and engaging. The book is a lively portrait of a committed scholar doing science with and for people, from the workers at a Montreal-area phosphate refinery whose children were being born deformed because of the radioactive dust their fathers brought home on their clothes, to the cashiers and bank tellers whose legs and backs were painfully damaged by long hours of standing, for no other reason than social prejudice demanding that a low-prestige person stand to serve a higher-ranking customer. As an ergonomist who observed workers doing their jobs, Messing learned to see what many of us, including policymakers, never think to look for. She helps us perceive harmful working conditions as well as what keeps us from adequately addressing workers’ health and welfare.

Of course it is often simply the profit motive – or its public-sector sibling, the neoliberal budget – that keeps us from prioritizing workers’ health. But Messing makes a compelling case that it is the low value our society places on women and workers that keeps us from caring about, or even seeing and believing in, their suffering. Not because anyone is evil, but because middle-class employers and scientists have very different life experiences from workers and see them through stereotypes. This, Messing says, is the “empathy gap.”

With examples from her experience, the work of fellow researchers, and the workers they spent thousands of hours observing, Messing makes visible the ways in which lack of empathy lets those in control disregard the suffering of fellow humans. She also reveals the ways in which the language that scientists use differs from the language of the judicial system, with sometimes catastrophic results. She explains some of the practical reasons our systems fail – and sometimes succeed – in protecting workers from radiation exposure, back injury, stress, sexual harassment, and much more.

Compared to Messing’s brilliant first book, One-Eyed Science: Occupational Health and Women Workers, which covers much of the same scientific and sociological ground with power and clarity, Pain and Prejudice feels as if it couldn’t decide whether it wanted to be a rendering for lay readers of the central findings of a distinguished career, or a memoir, and is the weaker for it. It is nevertheless an interesting account of a career that has been a model of socially engaged scientific inquiry.