Patrician Families and the Making of Quebec

The highbrow McCord Museum, on Sherbrooke Street in Montreal, and the more lowbrow Taschereau Boulevard on the South Shore have something in common: both are named after members of two prominent Quebec families whose power was established in the eighteenth century and lasted well into the twentieth. In Patrician Families and the Making of Quebec, Brian Young traces the history of these two families over four generations marked by conquest, wars, rebellions, revolutions abroad, and the piecemeal democratization of Quebec society.

The McCord family were originally Scots from Ulster, in Ireland; the Taschereaus had roots in Tours, in France’s Loire Valley. Both families built their power on a combination of aristocratic titles, land, influence within the Catholic or Protestant churches, and sway within important institutions such as universities and the legal and criminal justice systems. The author uses the word “patrician” to describe these particular elites: those whose high status, prestige, and institutional influence far surpassed what could be acquired with wealth alone. 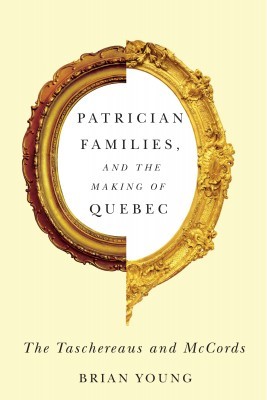 From the Taschereau family history, one gets a sense of the persistence of feudal power in Quebec well into the nineteenth century. Having settled in New France before the British conquest, this family of minor aristocrats not only successfully consolidated the seigneurial (i.e., landlord’s) privileges that they had acquired during the New France period, but they also managed to continue developing their possessions in the Beauce region south of Quebec City, thanks to the British recognition of French feudal institutions. Building upwards and outwards from this secular power base, Taschereau family members leveraged what power they had to acquire other positions: police commissioner of Quebec City, Archbishop of Quebec (whose titles included “Prince”), and even Premier of Quebec (the namesake boulevard was built during Louis-Alexandre Taschereau’s mandate). By focusing on family history over multiple generations, Brian Young draws shockingly straight lines connecting the power of ancien régime French aristocrats to the power within Quebec state institutions that persists to this day.

The McCords, on the other hand, did not have it as easy. From their start as merchants (acting, among other things, as one of the major purveyors of alcohol in the newly conquered British colony), this family rose to a more reputable rank thanks to land ownership in what became Montreal’s Griffintown and Lachine Canal area. However, by the time the Taschereaus occupied some of the highest places in the pecking order, the McCords’ status had diminished. It was a somewhat déclassé family head who oversaw the foundation of the McCord Museum, perhaps in an attempt to symbolically regain some prestige for his name.

In spite of the significance of both these families, the author does not make it sufficiently clear why the two were chosen as the subjects of his book. The histories are interestingly juxtaposed and certain contrasts – for instance, between a landowning French Catholic family siding with the British Crown during the American invasions at the end of the eighteenth century and an English-speaking Protestant family supporting the revolutionary Americans during the same period – are striking and challenge facile notions. But conjecture about the similarities or differences between these two families, or between them and other elite families in Quebec during the same years, is largely left to the reader. Nonetheless, the sheer depth of fascinating detail uncovered by the author’s original historical research into these two families’ trajectories more than compensates for any shortcomings of this nature. mRb

Joël Pedneault is a community organizer based in Montreal.