A review of Paul-Émile Borduas by François-Marc Gagnon

Walter Benjamin argues that a translation is the transposition of a text from one language to another as both a renewal of the original work and a revival for succeeding generations or alternate cultural contexts. With this in mind, the recent translation of François-Marc Gagnon’s biography of the celebrated modernist painter Paul-Émile Borduas offers a rich art-historical resource to a potentially global audience of English-speaking readers. At the same time, the effect of this linguistic “displacement” on our understanding of Borduas as a historical figure becomes a reoccurring theme within the content of the text itself. There is no question of the seriousness of the scholarship that Paul-Émile Borduas: A Critical Biography represents, nor of the extent of the contribution to the study of Canadian and Quebecois art history. The French-language version received a Governor General’s Award in 1978 and Gagnon is widely respected as the foremost scholar of Borduas and the Automatiste movement. Collectors and specialists will appreciate the gorgeous colour reproductions, which complement Gagnon’s precise enumeration of Borduas’ works and their pedigrees. Taking this as a given, the question that arises is then: what can this substantial tome offer readers with a more general curiosity?

Gagnon eschews speculative exploration of the artist’s psyche, nimbly sidestepping a pitfall of celebrity biography. Instead, he uses letters exchanged between Borduas and his friends and colleagues to show how the artist’s personal and professional struggles are articulated by people present in defining moments of Quebec’s recent history. Likewise the narrative largely follows the succession of the artist’s production, taking into account both works of visual art and writing. One significant choice made by Gagnon dueing the process of translation was to replace the earlier structuralist analysis with a formal approach to describing Borduas’ works. Rather than traversing literary interpretations of the non-figurative paintings, the reader makes their way through descriptions that link visual effects of composition to features that marked Borduas life, such as the regional landscape surrounding Saint-Hilaire where the painter began his career under the tutelage of the church-decorator Ozias Leduc. On the one hand, this approach can make the pace of the biography feel like a slow progression through a catalogue checklist. On the other, there are moments when this chronology of works intersects with events in Borduas’ life in a way that illuminates larger cultural questions of the period. This occurs, for instance, in the section covering his authorship of the Refus Global manifesto and subsequent dismissal by a government official from a long-term teaching position at the École du meuble de Montréal. 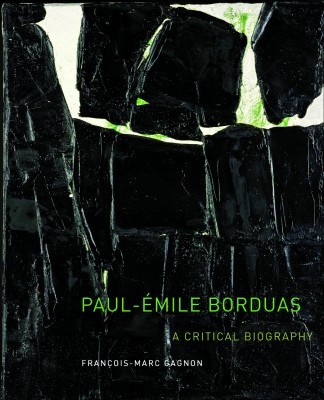 A stated goal of this translation is to “overcome a gap” between intellectual traditions underpinning French and English modernities in Quebec, Canada, and ultimately, beyond national boundaries. Gagnon demonstrates that this concern preoccupied Borduas himself, as the artist resided in New York and then Paris, where he passed away in 1960. Published in 1978, the French-language book responded to a context that had claimed Borduas and his sharp rebuke of stagnant social conditions as an inspirational model for the reinvention of Quebecois identity during the Quiet Revolution. Gagnon dispels some of the effects of this mythification through an astute juxtaposition of the Refus Global (and its post-WW II, Surrealist-inspired, anti-state anarchistic pronouncements) against the co-existing ideological patterns of conservative nationalism and  rattrapage. Gagnon’s careful contextualization emphasizes Borduas’ response to a stifling intellectual environment imposed by an authoritarian bind between the clergy and the state under Premier Maurice Duplessis. Gagnon’s analysis complements recent scholarship on Quebec, such as studies by historian Sean Mills and sociologist Jean- Philippe Warren, which distinguish between the ideological battles and the socio-economic conditions of modernization in the province.

Gagnon, through the translation work of Peter Feldstein, presents Borduas to us as an aspirant to world citizenship and global consciousness. In this current iteration of cross-cultural translation, Borduas’ life and work encourages the reader to reflect upon the complexity of multiple modernities converging across geographic, linguistic, class, and ideological borderlines.mRb

Felicity Tayler is an artist and PhD Candidate at Concordia University. She is a contributing author to Documentary Protocols (1967–1975), Actions That Speak, Ciel Variable, and C Magazine.