A review of Peacekeeper’s Daughter by Tanya Bellehumeur-Allatt

This thought kept coming to mind while reading Tanya Bellehumeur-Allatt’s account of her life in Lebanon. Peacekeeper’s Daughter is her memoir about her time in Lebanon with her family while her father, a UN peacekeeper, was posted there. Leaving snowy and cold Yellowknife behind for the unknown landscapes and heat of the Middle East, the family arrives two weeks before the Sabra wa Chatila massacre in 1982. This event ended with the killing of an estimated 3,500 Palestinians by the Lebanese Forces, with the support of the Israeli Defence Forces. The victims were mostly women and children.

Bellehumeur-Allatt worked on the memoir for ten years, realizing she had something to say on 9/11. Drawing on her journals from the period, she writes down every detail: how she felt and the sights and smells she experienced, with impressive accuracy. We feel as if we are there with her walking through West Beirut’s streets, crossing the Syrian-Lebanese border, and feeling the panic going through her when her family is mugged in Jerusalem. Her writing is on point, allowing us to travel with her. And it’s engrossing: we keep turning the pages, wanting to know more. We get attached to Bellehumeur-Allatt’s parents, who have two very opposite goals; her mother wants to protect her family from the war, while her father is invested in his peace mission, wanting to show his children the different cultures around the world.

Being the child of a UN peacekeeper comes with some privileges, which seem to be taken for granted by the young Bellehumeur-Allatt and her brother. With access to private pools, hotels, and even travelling outside the war-torn country, Bellehumeur-Allatt seems to lack empathy for the young Lebanese people stuck there in the war – a group that includes my parents, who, in 1982, were around the same age as the author. 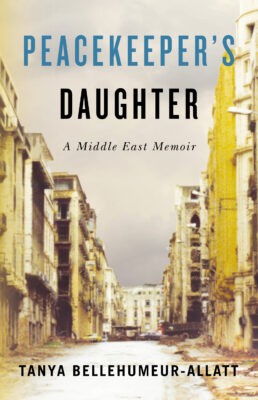 From the memoir’s opening lines, it is clear that twelve-year-old Bellehumeur-Allatt is dreading the move from home in Yellowknife to unfamiliar Beirut. Her dread is easy to understand; being uprooted from one’s home and school can be a challenging experience. While I empathize with the difficulties she faced, I felt that Bellehumeur-Allat harbours resentments, and her resentment impacts how she describes Lebanon and Lebanese people. Her hard feelings contrast with the stories I’ve heard from my Beiruti parents. Even the pictures featured in the book are a contrast to the ones that are featured in family albums. It is as if Bellehumeur-Allatt was in a different dimension and time.

This comes back to what is missing in this memoir; empathy and resilience are nowhere to be found. This absence ruined the experience of reading Peacekeeper’s Daughter for me. Bellehumeur-Allatt is a talented writer, but her story is that of a white Canadian child living in a country that has been at war for seven years. She dreams of her home in Canada, and of going back, which is what ends up happening. But, from the beginning, the war is nothing but a temporary instance in her life. Choosing to write her memoirs based on her experience as a young teenager might have been the downfall of her story.

When I hear stories from survivors of the Lebanese civil war, like my parents, and from members of the Lebanese diaspora, they are often filled with hope and happiness. In the midst of the darkness of war, I hear fond memories of a time when everything was uncertain, but when neighbours would help each other. I grew up hearing stories of a time when bombs would fall without interruption, but evenings were spent playing cards in underground shelters. I’ve seen more resilience and hope from families that lost loved ones in this horrific war than in Bellehumeur-Allatt’s story. This bothered me. The author would have benefited from revisiting her memories as an adult rather than staying close to her teenage self. And, as a result, she comes off as entitled and privileged.

But reading her memoirs opened a door for me to learn more about my own roots. I asked my parents about their experiences and for their opinion on Bellehumeur-Allat’s work, and they told me about how experiences of the war differ from one family to another. Bellehumeur-Allatt’s experience, even if it lacks some nuance, may be an essential read. As my mother, a proud daughter of Lebanon, told me, “Everyone’s experience of this war is important. Hers is as valid as mine.”mRb

Yara El-Soueidi is a millennial writer and journalist based in Montréal. She is currently working on her first novel.