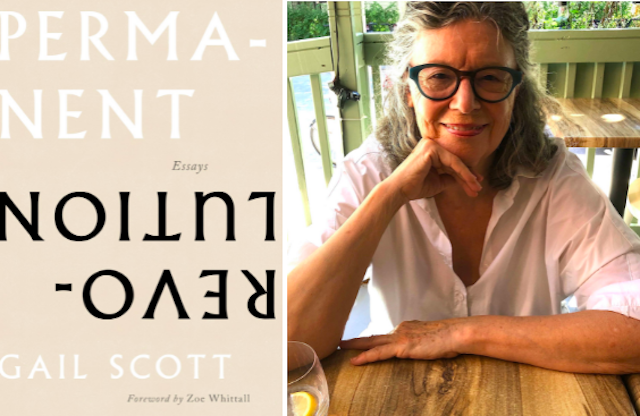 “Awriter must do as she can with her epoch,” writes Gail Scott in the preface to Permanent Revolution. “Rage accumulates.” Rage has continued to accumulate during this past year of pandemic and heightened injustice, as have isolation and a general sense of disconnect from the outside world. Scott, whose process of fiction-writing tends to involve walking busy city streets and listening to people in public spaces – “gathering language,” she calls it – found this was the ideal time to plunge into a long-shelved essay project. The resulting book is an energetic, non-linear tracing of Scott’s experimental trajectory, an intertextual conversation with her previous writing and writing from other feminist, queer, and otherwise margin-pushing writers.

Permanent Revolution is a collection in two parts. The first, “The Smell of Fish,” is a series of recent essays that interrogate form, through Scott’s novels Heroine (1987), Main Brides (1993), My Paris (1999), and The Obituary (2010), as well as the state of experimental or “difficult” prose today. In addition to form, Scott wonders how feminism and queerness interrelate and how these personal and political positions can be written. “As an artist, what I love about the notion of ‘queer’ is its motile identitary possibilities,” she tells me, over email. She senses that “queer” currently converses more easily with class and race.

However, she stresses: “I would not be the writer I am today, had I not been involved with La Théorie, un dimanche,” a group of feminist writers who assembled monthly for eight years in 1980s Montreal to discuss prose, feminism, leftist separatist politics, and whether language could, especially in French, be female. The group’s lengthy, engrossing meetings “taught me so much about writing, generosity, and solidarity,” she explains. She returns to these formative meetings and other questions on her mind at that time in the essays that make up the second part of the book, “Spaces Like Stairs,” originally published in 1989. 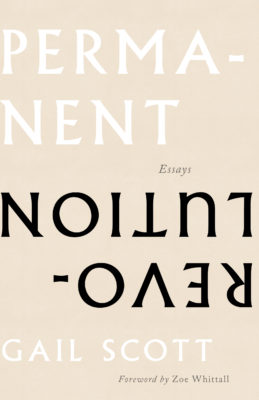 Since she first began to publish (Spare Parts, 1981), Scott has been preoccupied with the ongoing emergency of living and its textual expressions, and how these expressions must converse with our predecessors. “A living community is also a community of sentences, signing, in particular, our relationship to female ancestors,” she writes. As I read Permanent Revolution, it’s clear that Scott is also dedicated to interrogating her past selves. She describes the younger writer of “Spaces Like Stairs” as “this youthful person radiant with hope + intractable enthusiasm. But one also pocked with her + the era’s inadequacies.” The new book interrogates a literary trajectory that was made in the spaces between two binary genders and two colonial languages. In “A Visit to Canada,” which describes reading as a bilingual Quebec writer at Anglophone events elsewhere in the country, Scott writes:

The gap between the culture of the reading community + that of the community from which the text is written affects the text even on the level of syntax. The writer, in constantly taking wild leaps over those cultural gaps, is a Janus head, looking in two directions, an exercise both fascinating + disarraying in its implications.

Her prose experiments point at the possibilities in such gaps, while also asking who has the right to speak, and how. Once speaking, a writer might “open space for a polyphonic ventriloquy” in order to transmit other voices as well, allowing them to echo through time and space.

A question that preoccupies Scott, in both parts of Permanent Revolution: What is feminine writing or the feminine voice? She is fascinated, for instance, by the “brash – almost promiscuous – geometries” of Hilma af Klint’s paintings. Viewing the Swedish early abstract artist’s work at the Guggenheim in 2019, Scott found that the paintings were “emanating something akin to an unusual perfume, some signal not yet named.” Why is this work viewed as feminine, as opposed to say, the work of Kandinsky? She can’t quite put her finger on it, and eventually pushes past the question. For one thing, in the Québécois context, gender’s written expression is more complex than in English-language settings. Scott recalls Louky Bersianik, Québécoise feminist and member of La Théorie, un dimanche, who pointed out that “‘le féminin’ is a noun of the masculine gender, rendering an essentializing interpretation of ‘le féminin’ questionable.”

Interruptions in the wider culture can facilitate new approaches to identity and writing. In Quebec, the anti-feminist backlash struck in the 90s, following an era in which, Scott tells me, “Le Devoir was covering practically nothing but feminist writers in the literary pages.” This shift marked the moment when she began exploring questions of queer theory more than she had previously. Looking back, she recognizes the shortcomings of second-wave feminism, especially around race and class. While writing movements and concepts of a feminine aesthetic are still relevant, she tells me, “It’s just not me. I think I’ve gone somewhere, or I’ve always kind of been somewhere else. I wanted to talk more about what I’m calling ‘Fe-male,’ as a self-defined term.”

I ask her, if the gender of Gail is Fe-male, what does that mean, and where did it come from? “The word just dropped from the heavens one day,” she says. “I remember back when we were talking about l’écriture au féminin, people were asking whether a lesbian was a woman. That’s a really complex question to answer, I think the answer is yes and no, or yes or no, in varying degrees. ‘Fe-male’ as a concept is impacted by the importance of transgender people on the scene now. It seemed to be the right word for me as a writer, in this space and time.”

A state of permanent revolution is also a state of permanent questioning, of oneself and of one’s surroundings. Scott’s modes of questioning vary over time, but her concerns remain constant: feminism, queerness, class struggle, resisting capitalism and neoliberalism, the shape of sentences. I remark that so much visible revolutionary action happens in the street, which isn’t accessible to everyone. How does a person continue to resist as she ages? “I do go to demonstrations but I can’t really camp and sleep on the ground anymore,” Scott says. “For me now it’s become a question of disseminating the idea that neoliberalism is really dangerous and that you can’t give in, you have to keep fighting against it every day, refusing to write commodity work because you want the big prize, pushing at the edges in every way you can.” The writing should respond to the crises at hand. As she asserts in “The Sutured Subject”: “Where there is no emergency, there is likely no real experiment.”

The emergencies here are ongoing, the climate emergency, the settler colonial emergency, institutional racism and policing emergencies. Scott is heartened by the work of younger writers who are responding in prose, especially Indigenous writers like Joshua Whitehead, Liz Howard, or Jordan Abel, as well as the diverse group of writers who were her students during her fifteen years teaching creative writing in the Département d’études anglaises of the Université de Montréal.

Having left teaching two years ago, Scott is finally a full-time writer. Now that this essay collection is wrapped, she is putting the form aside. “I’ve stuffed what I have to say about writing into this book, now I’m going to stop pontificating and only write fiction for the next while.” She doesn’t yet know the shape of her next novel, and anyway, as she writes in “The Sutured Subject”: “I can never write the novel I want.” Other histories and voices make their way in. For now, she is listening to her Mile End neighbourhood, gathering language again.mRb