Love, Theft, and Bibliophilia in the Mile End

A review of Petty Theft by Pascal Girard

Pascal Girard’s Petty Theft is a fictionalized autobiographical account of the author’s surrogate character, also named Pascal, and his increasingly hare-brained schemes to stalk, date, and ultimately confront a cute girl he sees shoplifting a copy of his book. This innocent enough set-up is followed by an escalating series of comedic embarrassments in which Pascal repeatedly says the wrong thing at the wrong time and where everything he does to get out of trouble has precisely the opposite effect. Girard previously mined his self-titled character’s social and romantic awkwardness to great comedic effect in Reunion, a book about a disastrous high school reunion. This time, Pascal’s knowledge that the girl he is romantically pursuing is a shoplifter allows him a measure of detached confidence as he assures himself that he is really only doing “detective work.”

What that means, exactly, is unclear to both Pascal and his friends in the story, who have trouble understanding his strange fascination for solving the “case.” Of course, one explanation is that the girl, Sarah, is cute and that Pascal is flattered by the implicit compliment she paid him when she shoplifted his book. As he stalks her through landmarks familiar to anyone who has spent time in Montreal’s Mile End, the initially creepy vibe turns rather sweet, especially as Sarah proves to be entirely unrepentant about her shoplifting. In the end, Petty Theft is closer to being a comedy of errors about competing approaches to bibliophilic book-collecting than a full- fledged detective story, and it is Girard’s vibrant and accomplished cartooning that makes the featherlight narrative come alive. 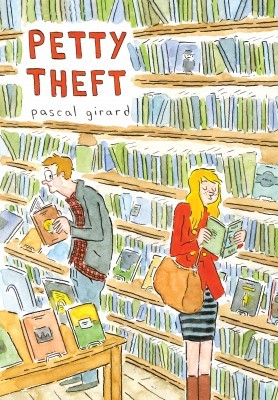 A master slapstick artist with a keen sense of comic timing and a knack for pinpointing the exact moment when human interaction takes a turn for the absurd, Girard is especially skilful at extracting humour from precisely rendered body language. While some gags ultimately fall flat – there are only so many times dropping a hammer or blindly bumping into things can be milked for laughs in a book this size, after all – the hit-to-miss ratio is high, especially when the jokes originate from Pascal’s unsuccessful attempts to act cool in front of Sarah. His frequent moments of imagining the two of them together – running naked on a treadmill while holding hands, romantically shoplifting together, and making love on a pile of books – are funniest of all. Supported by his pared-down graphic style, which emanates nervous energy from every squiggly line and cartoony bead of sweat, Girard’s storytelling is both fluid and comically self-aware throughout Petty Theft’s tightly-paced pages. The habitual reliance on a six-panel page layout and medium-shot drawings of two people talking, however, gets slightly repetitive and sometimes makes the story seem like a book-length newspaper comic strip.

This tendency towards monotony in panel and page composition is counterbalanced somewhat by Girard’s large cast of colourful characters and the lively feel of lived-in local colour he adds by depicting easily recognizable Mile End locations like Wilensky’s, Nouveau Palais, and the bookstore operated by his publisher, Drawn & Quarterly. As much a love letter to his neighbourhood as a charming tale about the perils of conflating sexual attraction with bibliophilia and detective work, Petty Theft continues Girard’s impressive run as one of the funniest comics chroniclers of masculine romantic anxiety. mRb