A review of Photogenic Montreal by Martha Langford and Johanne Sloan, editors

Photogenic Montreal is a ghost tour of Montreal. The book is a collection of essays on a variety of photographic archives documenting the city. It deals with questions of subjectivity, asking how the photographer as archivist imports their particular position, whether political or personal, into their work. Memory, too, plays an important role in the book. Photogenic Montreal reveals how a city’s present is haunted by its past, and how photographs store memories and tell stories about that past. A notion of archiving as an interpretative and activist practice pervades the book, which seeks to demonstrate the generative, and at times destructive, power of the photographic archive.

Phillippe Guillaume’s chapter on Jean-Paul Gill’s photographic archive of Montreal’s old red light district provides an example of the archive not as a preservational, but as a destructive force. As Guillaume aptly notes, an architectural photographic archive can also serve to argue for the demolition of a building, or in this case a whole six-city-block swath of land. In the 1950s, Jean Drapeau oversaw the demolition of the red light district, located around the intersection of Saint-Laurent and Saint-Catherine. The plan was both developmental and moralistic: the apparent scourge of the area was that of prostitution more than dereliction. 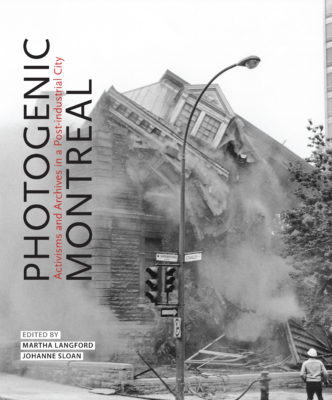 Gill was a civil servant who had previously worked as a police photographer. His project was commissioned by the municipal government, and the style of the one-thousand-and-five picture archive, as Guillaume notes, is more reminiscent of that of a mugshot than that of a typical architectural photograph: Gill’s photos condemn the buildings, reducing them to their street numbers much as the mugshot reduces its subject to a processing number. The demolition project was successful, and gave rise to the Habitations Jeanne-Mance, a social housing project controversial for its infrastructural shortcomings, still standing today. However, the photos in Gill’s archive do not simply document shabby houses address by address, but also capture the area’s inhabitants. These figures haunt the archive, reminding us that they lived in a more complex ecosystem than that of the endless chain of “strippers and hookers” – the corrupted women of the city’s political imaginary.

The various ways in which cities are inhabited and imagined are further discussed in Martha Langford’s chapter on photogénie. This term is ostensibly the motivation for the name of the book, describing the ways in which the act of photographing creates something beyond the object photographed: to be photogenic is to be beautiful, surely, but it is also to generate meanings – to elicit experiences beyond the sensory or aesthetic. Langford’s chapter provides one of these moments of engagement: discussing Mile End’s Champ des Possibles, she remarks on Emmanuelle Léonard’s photo series documenting the footprints left in the snow by workers cutting through the empty field, as well as on the various artistic and social gatherings which take place in the otherwise unused lot. The terrain vague, for Langford, presents an interstice – a moment of pause – between what could have been and what might be.

Although interspersed with passages of dense academic language, the book is a mostly accessible exploration of the history of the streets of Montreal through photos that have preserved, altered, and even destroyed the city’s architectural landscapes. Its articles refer to one another’s objects of analysis; the demolished mansions of the Golden Square Mile, the formation of the Milton Parc Co-op, and the computer lab “riots” of the Sir George Williams Affair reappear throughout the book’s chapters, reminders of the city’s tumultuous past. The book, much like the city, is haunted by the rise and fall of industrialism, the cloistering of public space, the fantasy of progress, the sentimentality of the past, and the utopianism of the future. Photogenic Montreal artfully demonstrates a city haunted by its own histories, archives haunted by what they exclude, photographs haunted by our distance from their author’s perspective – that subtle distance between eye and lens.mRb

Sofia Di Gironimo is a student living in Montréal, with interests in art, psychoanalysis, and the pursuit of a life of leisure.