Gendered Revenge in the Lion’s Den

A review of Please Join Us by Catherine McKenzie

If this were summer, I’d say grab Catherine McKenzie’s Please Join Us and hit the beach, but since we’re edging into winter, a cozy place next to a fire is also a perfect spot to delve into the intricacies of this novel. With all the makings of a well-heeled psychological thriller, the story will draw you into familiar territory with an intrigue built around hegemonic masculinity, the MeToo movement, and a feminine version of the boys’ club that turns the construct on its head in more ways than one. 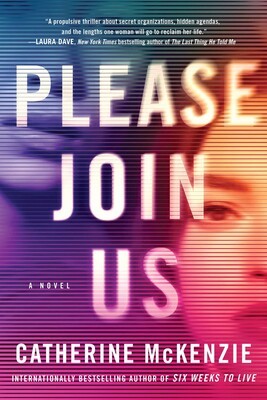 The rigid hierarchy of the law firm, where a points committee mystically determines a lawyer’s “productivity and ability to bring in clients” by “spitting out the number of ‘points’ (i.e., money)” is where it all starts going downhill for Nicole Mueller. How did she go from being at the top to suddenly having to scramble not to lose her footing? But more importantly, how will she turn this around? To add to this slippery situation, there is the amazing apartment that belongs to her husband Dan’s dying aunt Penny, which the couple is about to lose to Nicole’s sister-in-law Katherine. The future looks bleak.

So when an invitation to join an exclusive women’s networking club pops up, Nicole says “why not,” much to the dismay of Dan, who wonders aloud about the shroud of secrecy the whole thing is giving off. Isn’t the timing just too good, almost suspect? Why her, and why now? He even mentions the word “cult.” But it’s an opportunity she cannot allow to slip by. She needs all the help she can get. Completely unaware of the tangled web she is about to get caught up in, she accepts to go to the club’s fancy meet-up in Colorado. What could go wrong, right?

In a twisted game of allegiances, Nicole becomes friends with a group of women who all seek the same thing as her: how to get a foot up in a professional world where the old boys’ club reigns supreme. Panthera Leo, the networking organization described as a place where women help women succeed, seems to be the answer for all of the women involved, at first. There’s Athena Williams, the “recently elected first-time congresswoman, one of only a handful of Black women in the House,” who will become instrumental in a suspicious game of tested loyalties, along with Connie Chu, the founder of a huge security company, Samantha Cole, the actor whose career  seems to have levelled off, and Heather Davis, the corporate shark who specializes in hostile takeovers.

The group, aka the “pride” (of the genus panthera) is composed of everyone the  leaders Karma and Michelle will need to bring their plan to fruition – or so Karma thinks. Outing men in positions of privilege seems to be a theme for which Nicole’s skills as a lawyer come in very handy until things get very real, for all the women involved. After a harrowing event involving Athena, Nicole suspects there is much more to the sexual assault case she’s been prepping at Karma’s behest. Her sleuthing skills help her unearth what is really going on, but who can she trust? This is where I stop untangling the intrigue; no spoilers here. Suffice it to say that the story will give you its fair share of twists and turns throughout, and not just at the end. Beware of whiplash!

The levity of the preceding description hides more complex contemporary stereotypical gender dynamics. McKenzie seems to want to tackle these in her story. But Panthera Leo replicates what is already in place by creating a women’s version of the boys’ club, with requital on men for trivializing (and getting away with) sexual assault. But essentially, this is a revenge fantasy where women manipulate other women in the name of getting even with men.

Now, don’t get me wrong. I’m not saying the author should have reinvented today’s complex gender dynamics. But in an attempt to confront the stereotype, the narrative ultimately seems to play right into it. Perhaps, though, I am just too much the academic, always looking for that nugget. This is not a piece of sociological research; it’s a thriller, and a well-written one at that. Read and enjoy!mRb