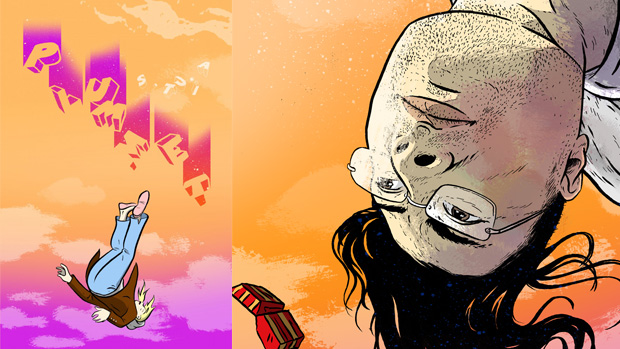 Delight in the Heart

Sherwin Tjia has been a part of the Montreal cultural scene for over twenty years, producing comics, graphic novels, poetry, short stories, and “choose your own adventure” books, along with several series of events (strip spelling bees, slow dance nights, and others). Tjia’s latest, the graphic novel Plummet, is the surreal story of a woman who wakes up to find herself, along with assorted other people and objects, in a state of continuous freefall. Somehow both whimsical and nightmarish, it’s an intense and gripping story leavened with moments of Tjia’s trademark lighthearted humour.

In the book’s afterword, Tjia explains how the inspiration for the story initially came from the figures falling from the World Trade Center towers on September 11, 2001. This dark event came up a few times during our interview in Tjia’s Plateau apartment, where they have lived “since around9/11.”

Though they publicly cultivate a sweetly eccentric persona (Tjia is unique among artists in self-describing their work with words like “odd” and “quirky”), in person they’re refreshingly candid, both about their own work (frequently referring to a lifelong quest to improve their artistic skills) and about the Montreal scene (a number of times during our interview, a bracingly honest assessment of some aspect of the community was quickly followed by the admonition “Don’t publish that!”).

A Toronto native, Tjia moved to Montreal in the late nineties to do an MFA, which they abandoned halfway through after running out of funds. (Montrealers of a certain vintage may remember Tjia’s comic strip Pedigree Girls from the pages of the McGill Daily.) Tjia then found work as a medical illustrator at McGill, which paid the bills for a decade before they decided to launch full-time into art and event planning.

Plummet has been in the works for a long time; Tjia dates the initial concept to 2006. “I wanted to make a book about a person falling,” they recall. “Initially it was going to be an animated movie. But I didn’t have the skills, and it was too time intensive. Ironically, if I had done it as a movie, it probably would have been done earlier.” The project proceeded at a decidedly on-and-off pace. “Sometimes I wouldn’t touch it for a couple of years,” says Tjia. These long gaps came, they explain, because “sometimes you come up on the limitations either of your abilities or imagination. But sometimes ideas or projects nag at you, and you return to them – because they’re important, or maybe the timing is better.” 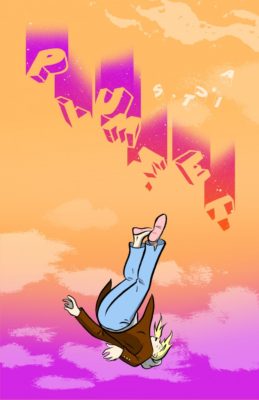 The book’s intensity comes not only from the subject matter, but also the singular focus on the main character, Amelia, and how she deals with the demands of her surreal new reality. About her life before the fall (so to speak), we’re offered only hints. “I certainly have a well-developed sense of what her life is like, what job she has, but I didn’t know how much of that I wanted to insert into the book,” says Tjia. “I wanted it to be unrelenting. It’s supposed to be a bit like a road movie, and the point of a road movie is that it’s propulsive.”

This focus also came from one of Tjia’s main influences, the famous Tintin comics by Hergé. “The idea to stick with one character came largely from my love of Tintin books. You follow Tintin on this grand adventure, and Tintin is the anchor, because everything around him changes all the time. But Tintin as a character is a bit of a cipher. Have you ever heard of Tintin’s mom? Never! Does Tintin have siblings? Has Tintin ever had sex, or is he a virgin? Who knows? But it’s not important, and Tintin is still compelling as hell.”

Plummet is also compelling, and a distinct departure from Tjia’s last graphic work, the low-key story collection The Hipless Boy (published in 2009 under the name Sully). “The Hipless Boy was just so earnest and nice and indie,” says Tjia. “It was very indie-rock feeling. I was still trying to figure out – not how to draw, but how to draw comics, how to make characters emote. I gained a lot of skills since The Hipless Boy. I didn’t know how to colour in Photoshop [laughs] and now I can colour like a fiend. But I’m just older now than when I made The Hipless Boy.”

Whether it’s due to aging or the current zeitgeist of global insecurity (or a bit of both), Plummet is also a lot darker than the sweet and casual feel of Tjia’s earlier work. “I read the news every day, and it sometimes feels like we’re falling to a dark place, and there doesn’t seem to be much way to pull back,” Tjia says. “I was inspired by the people on 9/11, who had to choose between two horrible options.”

But, they add with a laugh, “even if it’s about a harrowing situation, it was fun for me to make it. And I guess it should always be fun for the creator, because otherwise what’s going to get you through years of toil?”

As we wrap up our conversation, I ask what they think about recent changes in Montreal and how they affect artists. “For a long time, I thought Montreal was insulated from a great deal of the worst of gentrification because people can’t live here without learning French,” answers Tjia (who got into some hot water a few years back for claiming they didn’t have time to learn French owing to the demands of all the “quirky projects”). “But I think something’s happened because of the gig economy and the internet economy. I think the internet has made it more easy to be an Anglo here and do all your work online. I don’t know, this is just my feeling, but I think Montreal will get increasingly more gentrified – we’ll see all the people getting sick of Toronto because of the rat race beginning to come here. I think Montreal is going to gentrify even fuckin’ more in the near future, and you just have to accept it.”

Somewhat to my surprise for someone so associated with public events, Tjia adds: “These places where we used to go for a drink and then see a poetry slam or something – that shit is going to go and not come back. Because that’s not how people are socializing any more. People aren’t going to bars, they’re cracking open a beer at home and opening up Facebook. I think all the places that rely on people leaving the house are in trouble.”

And what’s next for Tjia? They have a few projects in the works that are secret for the time being, but they’re looking to get out of the indie-hipster ghetto. “You get older, and you kinda want to be mainstream. I’ve been indie so long, and that’s nice, but it’d also be nice to be invited to a Comiccon or something. Freelancing is tough. I’m happy to sell out, to a point. We’re all navigating what is going to pay the bills and what will give you delight in the heart.” mRb