Like many Indigenous people of her generation, Joséphine Bacon attended a residential school for most of her childhood, isolated from her Innu family and the seasonal rhythms of their culture. She went on to work as an interpreter for an anthropologist doing research in Innu communities. Working directly with elders made it possible for her to re-establish a connection to her culture and the land. This ongoing process of rupture and repair has had an enduring influence on her work as an internationally recognized poet and storyteller.

Bacon’s 2014 collection of poems in French and Innu, Un thé dans la toundra / Nipishapui Nete Mushuat, was a finalist for that year’s Governor General’s Literary Award as well as Montreal’s Grand Prix du livre. It is now available as A Tea in the Tundra / Nipishapui Nete Mushuat, a bilingual volume that maintains Bacon’s Innu alongside Montreal translator Donald Winkler’s interpretation of the French text. The poems are rooted in the concrete worlds of nature and the body, but evoke the presence of a larger, living spirit. Many are odes to the tundra itself:

The tundra at last
Resound my heart
Your music, the river
Your light, the stars
Your carpet, the lichen’s tender green 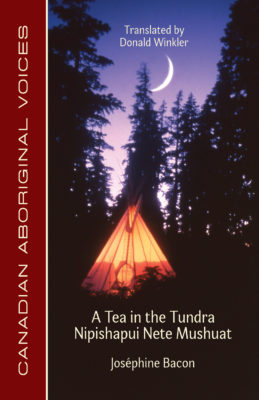 Others kaleidoscope between city and wilderness, subtly tracing the lines of Bacon’s own biography. “I must be absent / From the teaching of what I am,” she laments, remembering returning to school after a visit home, but then celebrates that “Today is today … I am myself once more / In laughter.”

Bacon has said that she writes her poems first in Innu, then rewrites them in French. The process is not one of translation so much as adaptation, moving the text not only between languages, but across space and time, between cultural contexts. Winkler’s task was likely similar. These short, unelaborated lines recall the vastness of the tundra and create a similarly unadorned space of contemplation, one that evokes a longing for a home, where self is found in relationship with others.

“How strange our present / and past coexist / and never merge,” Marc Plourde writes in Borrowed Days. Plourde’s poems are narratives of memory, snapshots, heavy with the weight of time. Character sketches such as “Cousin Jerome,” “For Monnie,” “A Soldier’s End on de L’Épée Street,” and “The Art of Departure” are almost devotional in their tenderness. “A Cowhide Mitten Made in China” recounts the burial of a pet bird inside the titular mitten and wonders at the keen freshness of grief from decades’ remove:

It’s not a thing you forget in an evening
though I tried
I took the cage, gravel, seed and
my friend in his leather coffin
and threw them away,
I mean
I threw them from my heart 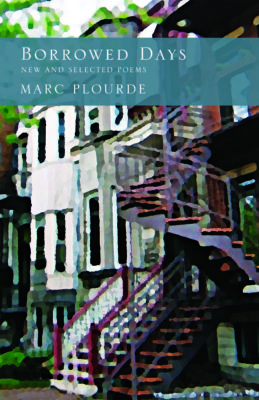 Plourde’s poems operate like short films or dreams, rehearsing a single moment in time that would be unremarkable but for its being remarked upon with such sweet specificity. More than his own internal life, what seems to interest Plourde is the mysterious persistence of such moments in memory.

Borrowed Days is Plourde’s second collection of poems and, as forty years have passed since his last outing, it is a welcomed return. While the book consists of a combination of new and selected work, the distinction between the two would be imperceptible if not pointed out to the reader. Plourde’s early work bears none of the marks of juvenilia, and his new work contains the same reliable melancholy. The poet’s faithful interest in the external world, however, keeps his poems surprising and full of empathy. A dog weaves between the chairs at a party celebrating the closing of a neighbourhood tobacco shop; a woman adjusts her hat at a funeral reception; a traveller on a bus watches mist crawl across mountains and wonders, “Tomorrow, who will remember this?” Consistently and sharply elegiac, Plourde’s poems search for the tether that connects the present to the past or for the mysterious weight that tips the scales between memory and forgetting. 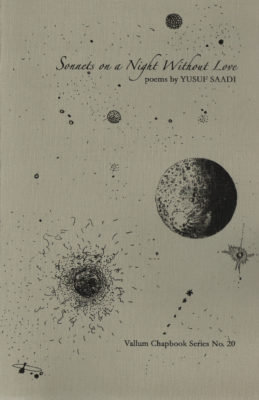 Sonnets on a Night Without Love
Yusuf Saadi

Montreal’s biannual Vallum Poetry Journal curates a chapbook series that has included works by Canadian and international poetry stars such as Franz Wright, George Elliott Clarke, Jan Zwicky, and Fanny Howe. The series’ latest edition is a collection of a dozen poems by Yusuf Saadi called Sonnets on a Night Without Love. Comprised half of sonnets and half of longer poems, the chapbook is quiet and intimate in its smallness, but its reach into physics and metaphysics makes it feel expansive. Love poems are addressed to light or fabric, or spoken by a discarded candy wrapper. The sonnet “Amperage” imagines a world where sound is harnessed for energy, where cars run on “lovers’ / arguments, a mother’s non-stop babble / could jolt a Macintosh, a faucet’s dribble fly a warplane.” There is a lightheartedness here that the chapbook’s scale could make cute, but Saadi’s command of his craft gives poetic heft to this small serving of his poetry.

This is a nocturnal collection, filled with moons and stars, shadows and constellations. Its upward gaze imbues the poems with awe. In “Posthuman,” as a civilization both collapses and coalesces, people look at their bodies and outer space with equal wonder:

… Someone unchained
the sun from its orbit. We watched it drift

like a curious child beyond the Oort cloud. Dimming
until it was another star in the night’s freckles

and even the day lost its name. We looked
at our hands with unfamiliarity. Trying to understand

The way star gazing shifts one’s sense of scale, Saadi’s balance between the immense and the insignificant deftly shifts the reader’s scope of vision, evoking the smallness and fragility of human life. Sonnets on a Night Without Love is the best kind of chapbook: to the reader who lacks ambition or fears commitment, it offers poetry in an unintimidating and digestible quantity, one that somehow feels at once lighter and more concentrated than a conventionally sized volume. It is an amuse-bouche that whets the appetite for more of Saadi’s work. 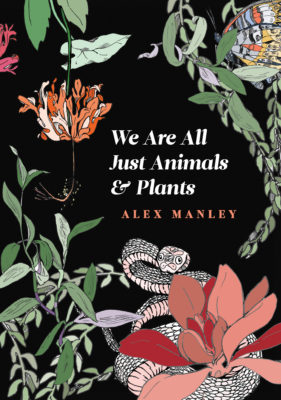 We Are All Just Plants & Animals
Alex Manley

One size up from a chapbook, Alex Manley’s debut, We Are All Just Animals & Plants, is a lean and cohesive collection of poems that search the natural world for the meaning of modern love and relationships. “Instead of writing a poem about this mess I made / what if I wrote a poem about the natural sciences?” asks the speaker of one poem. Nature is a prism that refracts the pathetic absurdity of waiting impatiently for the beloved’s texts.

If nature is also a safe retreat from the madness of contemporary society in Manley’s poems, it is primarily because you don’t find nature on social media. The speaker of the long poem, “All I Want,” proclaims:

All I want to do is write about the things in
the ocean, the plant and animal life,

the dust motes slowing making their way
through sunbeams, glinting,

skin cells from all the people who were born
on land and died in the water.

No one ever tells you not to date the ocean.

Romantic love lacks the immensity, mystery, or majesty of the ocean. Its pace is frantic and insecure: “Are four hundred texts too many to send in a single Groundhog / Day and night of misfortune?” The repeated phrase “All I want …” suggests that the speaker is controlled by desires that he is incapable of identifying with any precision.

There is navel-gazing here, but the fact that these poems are frustrated with their own obsession with the personal, with their own trivial and mundane sadnesses, is their saving grace. They kvetch with enough self-effacing charm to keep the reader moving to the last poem, “Noahtic,” which suggests that the triviality of our desires is precisely what will kill us all off in the end, to Mother Nature’s great relief.